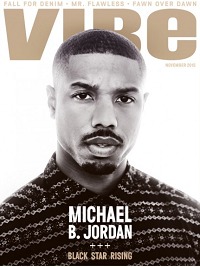 Back-to-Back! In less than a week, actor Michael B. Jordan nabbed another magazine cover. We last saw the Creed star on the cover of Men’s Fitness magazine here.

For this issue, the Newark, NJ-native was lensed by photographer Peter Dokus and styled by Jeff K. Kim for The Only Agency.

Inside, the actor details the process of filming Creed, how he plans to tell the story of the black male on screen and more: — “I’m trying to shine a light on doing films that get people to think about the things we have in place: our systems, education, judicial, police brutality with Fruitvale Station. I want to tell the contemporary black male experience today of those situations of how we’re treated.”

On showcasing his true personality without being offensive:

“I’m a normal guy, I’m a regular guy. I try to be anyway, but I say with success and certain things that people…they look at you as if you’re not allowed to be as normal or as human as you want to be.”

← Previous Story Michael B. Jordan Covered In Oil For ‘Creed’ Promo Pic; Plus His Men’s Fitness Cover
Next Story → Actress Lupita Nyong’o Took A Slaycation For The Holidays On The Cover Of Rhapsody Magazine