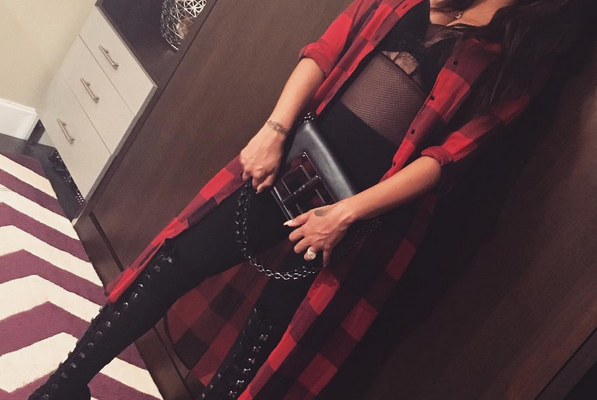 The 2015/16 NBA season is in full effect and celebs are flocking to arenas across the states to sit courtside and watch their favorite teams play.

This is donbleek.com first courtside post of the 2015/16 NBA season, therefore, we’re going to kick it off with our hometown team (New York Knicks).

Actress Lala Anthony, who is married to NBA superstar Carmelo Anthony of the Knicks was photo’d arriving to Manhattan‘s Madison Square Garden with her son Kiyan.

For the game, Lala styled in a black & red checkered extended button-up from Zara which was layered over a Le Perla top with black tights. Her outfit was accessorized with a Tom Ford bag and $2,595 Christian Louboutin Top Croche Over-The-Knee Red Sole Boots.

The boots are available at Neiman Marcus.