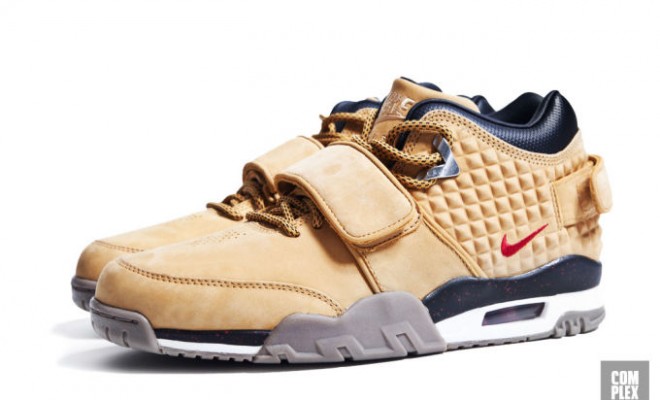 Last August, donbleek.com reported that New York Giant wide receiver Victor Cruz may have a signature sneaker in the works with Nike (see it here).

We were right but we were wrong about the style of the shoe. We originally reported the Nike Air Trainer V Cruz ‘Red October‘ sneakers were set to hit retailers on October 2 (see it here), but they did not drop because they were just a sample floating around online.

However, today, we have another update via Complex. The name of Victor Cruz‘s Nike signature shoe is the Nike Air Trainer Cruz. This sneaker features a similar Bo Jackson midfoot strap and midsole, and comes in four colorways – Haystack, Rush Blue, Wolf Grey and Black/Crimson. Each shoe has “Dance to Greatness” printed on the inside of the midfoot strap, while the Black/Crimson pair has, “In  Memory of Mike,” which pays tribute to NFL superstar’s father who passed away. A number “3” is also on the inside of the tongue, paying homage to the firefighter ladder that his father was a part of.

The Paterson, New Jersey-native has been dipping into fashion lately. We recently reported that Cruz is collaborating with denim brand 3×1 for a capsule collection and is the face Of Riccardo Tisci‘s Givenchy Fall/Winter 2015 Advertising Campaign.

Cruz has a great sense of fashion. He partnered with Tiffany And Co. for the launch of the new Tiffany CT60 Watch Collection, starred in Kith for Ones Stroke Genesis Collection lookbook here, Gap Factory Ad Campaign here, and he appeared in campaigns for Nike and Hugo Boss.