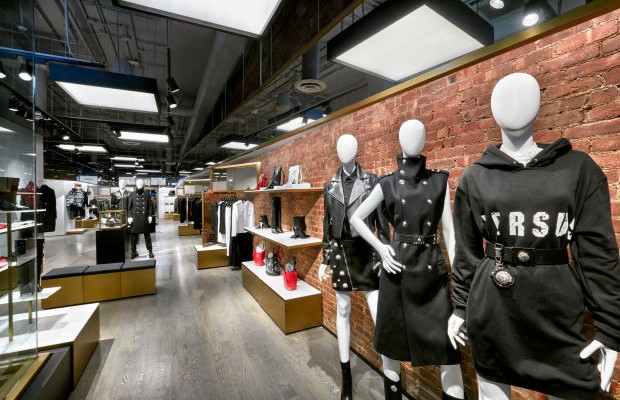 Versus Versace Arrives In The U.S. Market; New Flagship In NYC During London Fashion Week, Anthony Vaccarello presented his Versus Versace Spring 2016 collection. This marked his second collection as creative director of the brand. In the beginning of the year, Italian fashion designer and current Vice President of the Versace Group, as well as its Chief Designer, Donatella Versace named Anthony Vaccarello creative director of Versace‘s sister line, Versus (see it here).

During the midst of LFW, Versus Versace quietly arrived in the U.S. market with a flagship in NYC‘s Soho neighborhood.

According to Fashionista, “Customers and passersby watched the fashion show from the Italian label’s first U.S. flagship store. The special event was live-streamed on flat-screen televisions among two-way mirrors and brass hardware, a design concept by Donatella Versace in collaboration with the English architecture firm Carmody & Groarke. Promptly after the runway show, select looks from that same collection were available for purchase on the sales floor.”

The Italian house plans to open a second U.S. location in downtown Los Angeles sometime next year. Versus is major overseas. They already have 22 stores worldwide including in Paris, London and Tokyo.

In an email sent to Fashionista, Donatella said, “Versus Versace is not a second line, it’s a very separate brand with its own identity and attitude. It has its own language, its own look and its own global community. Versus Versace is about rebellion, individuality, defiance and free thinking.”

Photo Credit: Courtesy of Versus Versace