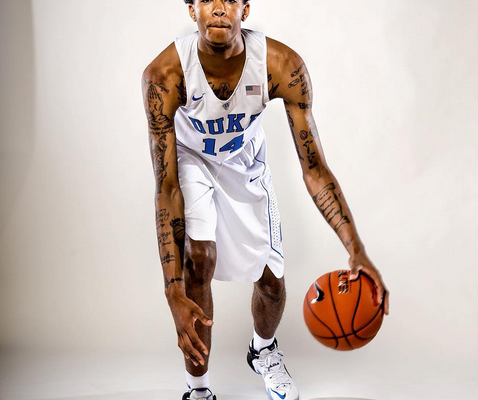 On October 17, Brandon Ingram will make his college basketball debut. The 18-year-old 6’9″ freshman is a guard/forward for the Duke Blue Devils men’s basketball team.

The team has the fourth-highest number of all-time wins of any NCAA men’s basketball program, and is coached by Mike Krzyzewski.

I am looking forward to seeing the N.C.-native debut for Duke. I believe that this kid is going to be a problem. He has the abilities to become a superstar talent.

• Four-year letterwinner at Kinston for head coach Perry Tyndall
• A 2015 McDonald’s All-America selection … scored 15 points on 6-of-11 shooting from the field and 3-of-4 shooting from the free throw line for the West … also contributed two steals, an assist and a block
• Member of the Parade All-America team, joining Duke teammate Luke Kennard
• Named to the 2015 North Carolina Basketball Coaches Association All-District first team his senior year
• Joins Kinston teammate Darnell Duncan as the only two boys basketball players in North Carolina High School Athletic Association history to win four consecutive state championships
• Averaged 24.3 points, 10.4 rebounds, 3.6 assists, 3.0 blocks and 1.6 steals per contest as a senior in 2014-15 … helped guide Kinston to a 26-4 record and its fourth straight state title
• Scored a season-high 43 points in season-opener against Eastern Wayne … registered double-digit points in 29 of 30 games, including 24 games with 20 or more points
• Recorded 19 double-doubles during his senior year, including a five-game stretch with double-digit points and rebounds in the same contest
• Dished eight assists in three consecutive games, while averaging 21.7 points and 10.7 rebounds over the three-game span
• Blocked a season-high eight shots against Farmville Central
• Garnered MVP honors following the state championship after finishing with 28 points, 10 rebounds and five blocked shots against East Lincoln
• Scored a team-high 20 points on 8-of-12 shooting, while also bringing down a team-high seven rebounds, blocking six shots and dishing five assists in a semifinal round win over Fairmont
• Led Kinston in scoring with 14 points and collected 11 rebounds to record a double-double in a quarterfinal round victory over Farmville Central … contributed on the defensive end with eight blocks
• Netted a game-high 26 points against Cummings during the North Carolina High School Athletic Association state tournament … posted a game-high six blocks
• Posted a double-double with 30 points and 13 rebounds against Greene Central in the second game of the North Carolina High School Athletic Association state tournament … connected on 11-of-13 free throw attempts
• Opened the North Carolina High School Athletic Association tournament by scoring 25 points and shooting 3-of-4 from beyond the arc against North Carolina School of Science and Math … brought down 11 rebounds, including seven offensive boards, for a double-double
• As a junior, averaged 19.5 points, 9.1 rebounds, 2.5 blocks, 1.5 assists and 1.0 steals per contest in 2013-14 … also led Kinston to a 26-4 record and a North Carolina 2A state title
• Recorded a double-double after dropping a team-high in points (28) and rebounds (16) in a win over North Rowan during the 2A state title game, earning Eastern Regional Most Valuable Player honors
• Shot a 8-of-10 from the field, and a flawless 8-of-8 from inside the arc, en route to a 20-point showing in a 2014 state semifinal win over Northside … blocked seven Northside shot attempts
• Opened the 2014 North Carolina High School Athletic Association state tournament by scoring a team-high 21 points on 7-of-9 shooting from the field and 3-of-4 from beyond the three-point line
• Competed in 28 games as a sophomore in 2012-13, averaging 12.4 points, 3.9 rebounds, 1.5 assists and 1.3 steals … guided Kinston to a 28-2 record and a state championship
• Tallied 12 points, four rebounds, four blocks and a steal in Kinston’s come-from-behind victory over Cuthbertson in the 2013 2A state final
• Led Kinston to a quarterfinal win over Bunn in the 2013 North Carolina High School Athletic Association state tournament … scored 17 points while shooting 7-of-9 from the floor … registered two blocks
• Ranked No. 3 by ESPN and Scout.com and No. 4 by Rivals.com
• Rated as the No. 4 player in the 2015 class by the Recruiting Services Consensus Index

USA Basketball
• Member of the 2015 United States Junior National Select team … contributed 12 points on 5-of-6 shooting from the field at the 2015 Nike Hoop Summit.