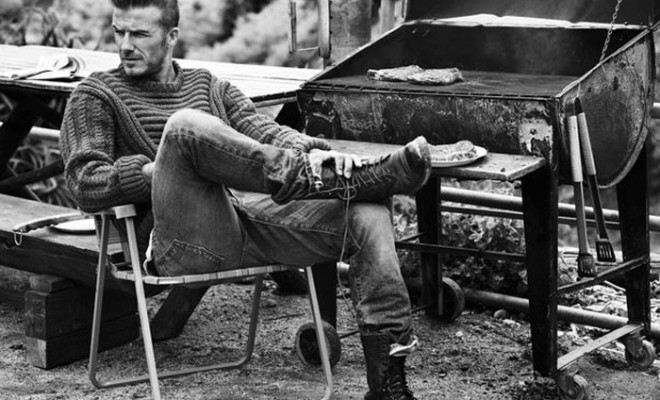 English footballer David Beckham continues building his fashion empire. He already collaborated with Swedish brand H&M for an Essentials Collection and Bodywear collection. Beckham also released a men’s fragrance and apparel with adidas, and 10 motorbiking pieces that he designed for Belstaff stores.

This past Wednesday (September 16), a five-year agreement with the Kent & Curwen brand was revealed in the Far East. “Beckham will play a multifaceted role in expanding the British brand’s appeal to younger consumers. The agreement is the first deal for Seven Global, the joint venture between Beckham and his partner Simon Fuller with Li & Fung spin-off Global Brands Group Holding Ltd. formed late last year. Beckham and Fuller are 50-50 partners with GBG,” according to WWD.

“Trinity International Brands Ltd.— which owns the Kent & Curwen brand — said Beckham would be personally involved in all aspects of the brand’s business, including product development, market expansion, advertising and store design and location. Under the terms of the deal, the Kent & Curwen brand would be Beckham’s only apparel line. He has other partnerships, such as a long-standing relationship with Coty and David Beckham Bodywear by H&M. The latest partnership includes a nonexclusive right to distribute other David Beckham products in Kent & Curwen stores. Kent & Curwen currently operates 113 stores in 51 cities in China, Hong Kong, Macau and Taiwan.”

Beckham said, “I’m always looking to work with brands and companies that have a rich history and authenticity. When this authenticity is rooted in the country that I came from, it attracts me even more to the partnership.”

He added, “What I love is that Kent & Curwen has a pedigree and excellence that has been passed through generations.” “Our aim is to build on its existing popularity and success in China and establish it as a powerful brand globally.”

“I’ve always been inspired by simple, effortless style. Sometimes it’s a pair of classic jeans and a T-shirt and sometimes it’s a great suit from a classic British tailor. I experimented with fashion a lot when I was younger, but as you get older you tend to have a greater understanding of what fits and suits you.”

However, Beckham would not be actually designing products under the terms of the partnership agreement, but he will be making personal appearances to promote the brand.