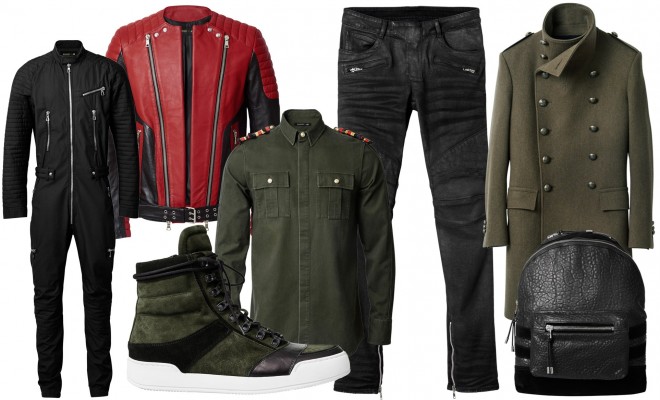 Last May, donbleek.com reported that Swedish retailer H & M Hennes & Mauritz AB (H&M) announced a holiday collaboration with Olivier Rousteing‘s Balmain (see it here) and a few week ago, we posted a first look from the collection which was a limited -edition dress featuring Balmain‘s signature embellishments with rhinestones, metallic threads and pearls as well as a structured, boxy shoulder (see it here).

Today, we’re posting another look from the collection, thanks to the October 2015 issue of British GQ. Pieces from the upcoming collection including a boiler suit, leather jacket, trainers, shirt, jeans, a coat and bag is featured in the publication’s newest issue.

On H&M approaching him about doing a collaboration:

“When they first came to me late last year to ask Balmain to be involved in this collaboration I was so pleased,” says Rousteing. “I love H&M and I love its vision. I couldn’t say no. I still wear H&M and I just love its global nature and the vision it brings to the world, and I think it is great to mix my vision with their huge global platform.”

“Balmain is super-expensive so it was really a challenge. The H&M team knew this, too, but they knew what they were going for. They wanted the luxury, they wanted the sharpness of the jackets. The challenge was to make it affordable, so we changed the fabrics and techniques. We did a little less embroidery. It was a compromise but we made certain the quality was still there. It wasn’t easy for me and it wasn’t easy for them, but I think we should be proud of the result. I know there are people that love Balmain but who can’t afford it. Maybe they will never be able to afford it but now for once in their life they can have a piece of me.”

H&M‘s head of design Ann-Sofie Johansson agrees with Rousteing that it was challenging. “We set the bar pretty high to work with Balmain. We had never done anything so decorated before,” she says, “and we weren’t sure we would be able to pull it off. But our suppliers thought it was fun to do something so full-on and I think Olivier is really happy with the end result.“

The collection H&M x Balmain collaboration will include men’s and women’s clothes, shoes, and accessories and is scheduled to him the company’s e-commerce site and stores worldwide on November 5.

Stay tuned to donbleek.com for more details as they emerge.