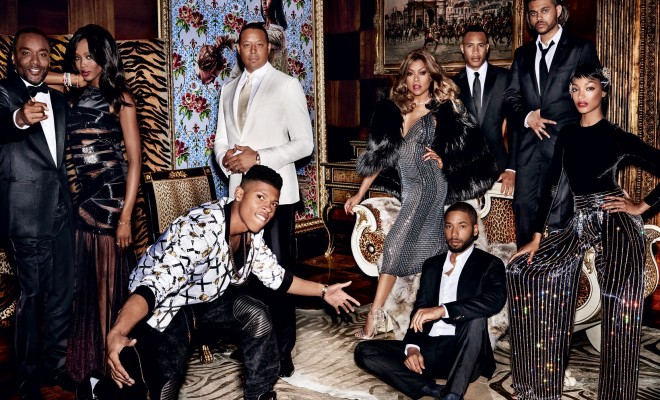 The above image is the cast of Empire, Jourdan Dunn and The Weeknd for Vogue September 2015.

Do you like shopping at Saks Fifth Avenue? Are you a fan of the show Empire? If so, you’re in for a treat!

The luxury department store has teamed up with Fox to produce a “multiplatform partnership” around the hit series Empire , according to WWD.

“Empire is meaningful and speaks to a wide audience,” Marc Metrick, president of Saks Fifth Avenue, told the online publication. “Different characters have different fashion sensibilities, but they’re all fashionable. Luxury to me is a dream. It’s something that can’t all be real. It starts with these characters and this world people climb into every week.”

The highly anticipated show will premiere on September 23 and in celebration, Saks flagships in New York and Beverly Hills will showcase themed windows. The Empire-inspired displays will be on display from Sept 10 to Oct 7.

“This rollout at Saks positions ‘Empire‘ as a fashion brand,” Jeffrey Godsick, president of Twentieth Century Fox Consumer Products, told WWD. “As we introduce the next layers we’re doing, such as collaborations and having interesting designers create clothes for the cast, [we’ll have that credibility.]”

The show (Empire) will be featured in the Saks fall magalog.

“We wanted to introduce Empire as a lifestyle brand from the outset,” Godsick said. “It has aspirational qualities. We believe it can be a stand-alone fashion brand. It could be an Empire label or a label related to a specific character.”

According to WWD, curated product selection of brands that represent Empire‘s aesthetic will include Alexis Bittar fine jewelry, Cushnie et Ochs women’s ready-to-wear, men’s and women’s footwear from Jimmy Choo and handbags and accessories from MCM.

The selected pieces will also be available in select Saks stores nationwide and saks.com. Additionally, they will retail on each brand’s e-commerce websites and stores.

What are your thoughts of the partnership between Saks and Fox‘s Empire?