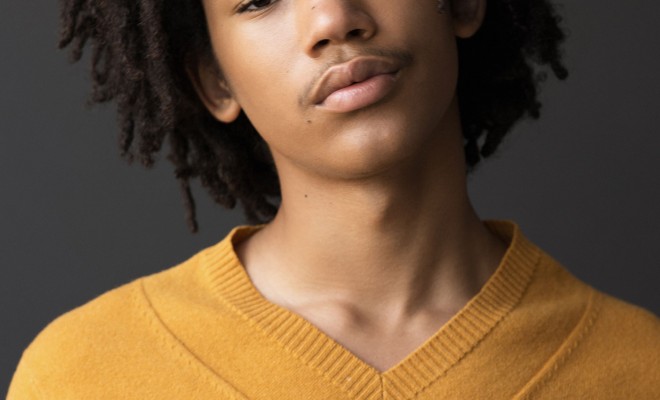 Teenage model Luka Sabbat is featured in a fashion editorial for W Mag.

Photographer Matthew Priestley photographed the shoot and styling was courtesy of Sam Walker.

Inside, the 17-year-old New-York-based fashion model talks about attending John Galliano‘s show as a child, doing a collection, and social media.

Sabbat on being at fashion shows as a kid and attending John Galliano’s show (his mother worked as a stylist for Galliano and Dior. She’s now at Condé Nast):

“I would be front row at Galliano and crying because the music is loud and everybody is clapping,” Luka recalls of his early childhood. “I was just so confused. And then I would go backstage and all the models would hold me. That was the best part. I’ve always liked beautiful women.”

On doing a fashion collection:

“Hella people are telling me to do a collection now, but I don’t want to do anything until I feel like I’m ready,” he says. “I have sick ideas for clothes though, like stuff that no designer has ever even done and cuts that haven’t been made yet.”

On how everybody wants to be famous on social media and how everyone is a fashion designer nowadays:

“Everyone wants to be Instagram famous now,” Luka laments. “They want so many followers and to hang out with this person and that person, and be seen. I feel like so many designers—and I say that with heavy air quotes—just release a few t-shirts or a few hoodies and they’re like, ‘I’m a designer!’ It sucks. So many people are famous for the wrong reason.”