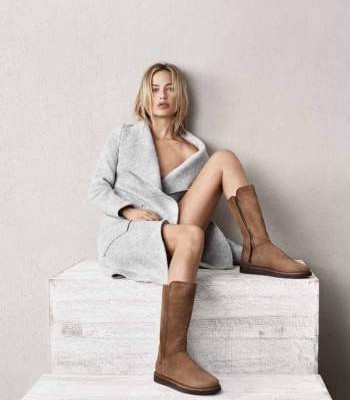 Murphy poses for the Australia footwear brand’s new line of limited-edition boots, dubbed Classic Luxe Collection. The capsule which was made in Italy features a slim, elevated iteration of the famous sheepskin padded boot. The styles have a slimmer fit that Ugg hopes will capture a new more fashion-forward customer.

The images were shot by Josh Olins at Pier 59 Studios in New York. Styling was courtesy by Ludivine Poiblanc and creative direction by Semjon Von Doenhoff.

“I actually grew up with the brand because I come from a family of surfers,” Murphy said. “I was given my first pair when I was pretty young from my uncle in Australia. I have this awesome connection to it. Having lived in California, when you get out of the water, that’s just the first thing you do. Wrap yourself in a big towel and put on your Ugg boots to keep your feet warm.”

“Shooting this collection was surprising because when I arrived on set, I saw that this wasn’t your typical Ugg boot,” she says. “The shapes were a little bit more refined. I was really excited about it because now I can incorporate them into my everyday wardrobe.”