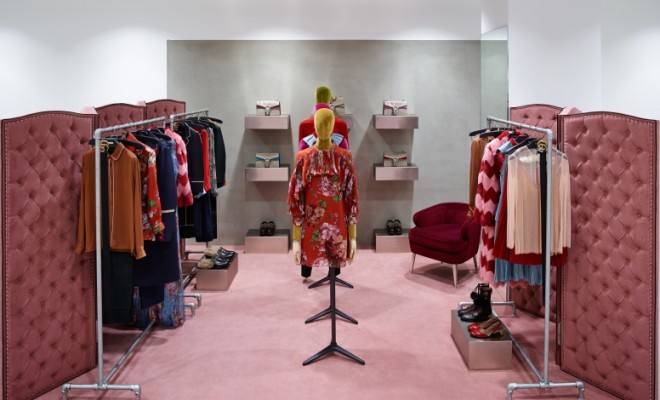 The luxury house is invading Dover Street Market via shop-in-shops at DSM‘s New York, Beijing, Tokyo and London locations. Each spot will carry Alessandro Michele‘s debut Fall/Winter 2015/16 collection which we posted here as well as Cruise 2016.

Following the Tokyo opening, will be New York and London on September 10th, during New York Fashion Week. Beijing will open later this fall.

“We were enthusiastic when Dover Street Market approached us with the idea of this global collaboration, which is emblematic of our new vision for Gucci,” said Gucci’s CEO and president Marco Bizzarri.

Bizzarri added, “Building unique and exciting collaborations with selected specialty stores is a new page at Gucci. I am sure it will be appreciated by our customers and those who are now approaching the brand as it is becoming more intriguing and fashion forward.”

“We have always believed in breaking the rules and taking risks,” said Dover Street Market president Adrian Joffe. “For a company like Gucci to do this was, for me, pretty astounding, and on top of that we loved the collections. They have that wonderful combination of new and traditional as well as being conceptually authentic. We are very proud and honored to be a part of the Gucci revolution.”