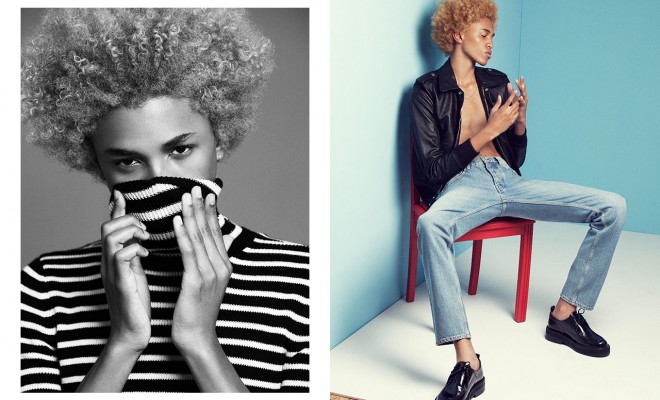 “It” model Michael Lockley is having a great year so far.

The blonde hair model walked the runway during Milan Fashion Week here and London Collections Men’s here. He also walked for Louis Vuitton last January. Aside from walking the runways around the world, the New York-native has also appeared in various editorials, magazines, and ad campaigns.

Lockley is featured on Models.com for the site’s ‘The New School‘ editorial. In the images, he styles in a sweater and leather jacket by Saint Laurent, jeans by Sandro and shoes by AMI.

The pictures were photographed by Paul Morel in his Paris studio.

Below is an excerpt:

Amid the fresh-faced new upstarts of 2015, Lockley stands out from the crowd with his remarkable blond-tinted Afro, in a shade he calls his “mixed hair color” and says he picked just before starting to model about a year ago. “I dye it a little bit to give it more of an effect for my look,” he explains. Signed after his mother showed his picture to a friend, the young New Yorker says he has always been into fashion, describing his own look as urban and vintage with a “funky vibe.” After walking for Louis Vuitton in January as his first show, Lockley—and his famous hair—were a big hit in June, when he walked for Margaret Howell, Jil Sander, Kenzo, and Paul Smith. A student of computer engineering, Lockley says he hopes his unique look can help encourage other people to think different. “I want to inspire people to dress how they want to dress,” he says. “Dress the way you want to feel in the clothes that you like.”