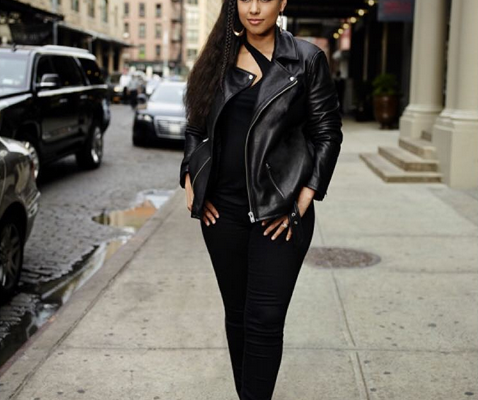 Alicia Keys Is The New Brand Ambassador For Levi’s The is somewhat a blast from the past! Levi‘s jeans were very popular in the 90s when I was a kid. My mother and stepfather used to wear those jeans. They also dressed my brothers and I in them. I haven’t wore or seen these jeans since forever.

“The one comment that came up in every interview was that fabric and feeling is now as important as fit,” Ms. Hillman said, a possible side effect of the rise of activewear, with its related emphasis on nonconstricting but formfitting materials. “Five or even three years ago, that wasn’t true.”

Keys grew up in NYC and she always wore Levi‘s, but also experimented with other brands. “I always found my way back.”

In the campaign, Keys wore in the new 501s and the high-waist skinny styles.

“It’s so much better because the stretch is really comfortable,” Keys said, pointing out that she had just had her second child. “You don’t have to lie on the bed to get them up. You know, I’m a very shapely woman, and often a lot of fashion does not seem to celebrate a shapely woman. But that courtesy should be present in everything we wear.”

Keys will also appear in a video made for TV and movie theaters as well as digital, which features a song entitled “28,000” (the number of days in an average life) from her coming album. Print ads will also feature emerging indie musicians like Ryn Weaver and the French-Cuban sisters the Ibeyi twins.