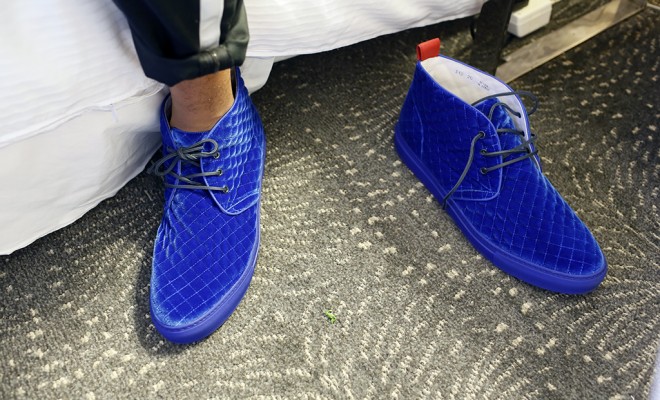 Dominican-American basketball player Karl-Anthony Towns is just a few hours away from being drafted in the NBA. He is expected to be the Minnesota Timberwolves‘ number-one NBA draft pick. The 2015 NBA Draft will be held tonight Thursday (June 25) at the Barclay Center in Brooklyn, New York. The sports event will be televised nationally by ESPN.

The New Jersey-native who played one year of college basketball at the University of Kentucky is in NYC for the draft (of course)  and as well as press.

Yesterday Wednesday (June 24), Towns made his media rounds. For his outings, he wore a gray quilted Rag & Bone bomber jacket, black-and-white track pants and a white sweatshirt worn over a collared shirt. His outfit was topped off with a pair of royal blue velvet Del Toro shoes.

While on his press run, Towns chatted with WWD. Brands doesn’t matter to him.

“For me, it’s not about the designer, it’s more about the look,” the 19-year-old told the publication. “At the end of the day, I’m just trying to wear clothes that make me look good.”

WWD reports, “Rag & Bone managing partners Marcus Wainwright and David Neville were both on hand at the Westin Hotel in Times Square to meet Towns and talk basketball. The two frequently make custom clothes for NBA players including Carmelo Anthony and Dwyane Wade.”

“It’s good for us to broaden our horizons beyond this very small fashion world. We are big basketball fans, so we’ve dressed quite a few people. It’s fun to do, but it’s not easy,” said Wainwright, who was referring to the players’ not-so-usual measurements.

“The greatest thing about having a stylist is that you find clothes that mold to your fit and you don’t have to make a universal fit work,” said Towns.

“I would love to put my ideas on clothes and see the reception I get,” he said. ← Previous Story Russell Westbrook Wears A Fear Of Good Hoodie In Paris, Talks About His Next Style Move
Next Story → The 2015 Draft Top Prospects Show Off Thier NBA Style For Tonight’s NBA Draft On ESPN