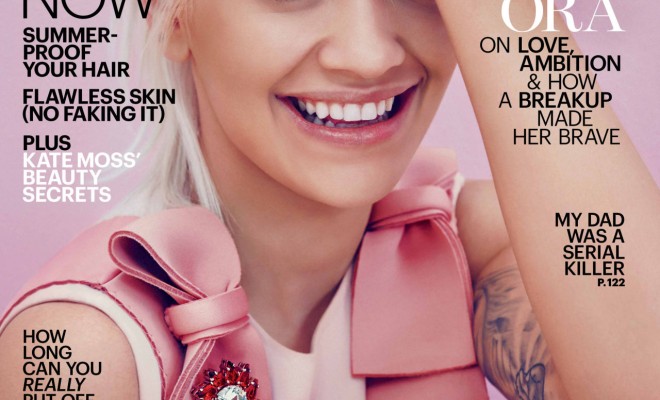 The British-beauty is a major factor when it comes to fashion. Ora has already inked endorsements with Roberto Cavalli, DKNY, Rimmel London and has a clothing line with adidas Originals.

The shoot was lensed by photographer Beau Grealy.

Inside, the “Poison” singer talks about playing the house diva, dating, her recent breakup, playing a drug addict, recording three songs with Prince and much more. Below are some except:

On playing the house diva behind the turntables while her parents thought she was going to sleepovers: “I would rip my T-shirts and be really punk and not clean. And I would have blonde hair, really dark eyebrows, red lipstick, lots of fake rings that made my fingers go green. I wouldn’t be smelling that great…. But me and my friends, we were really, like, rebel-y. I feel like I lived a lot when I shouldn’t have.”

On dating: “I’m afraid of being alone. I’m not afraid to admit that, you know. I’m not embarrassed to admit that. I just hope it’s not a never-ending cycle. Sometimes love just makes you feel crazy. And that feeling that we have as girls, just to have that feeling, even for five seconds, it’s like crack. I mean, don’t compare it to that, but you know what I mean. It’s like comfort eating.”

On her recent breakup: “There was a reason why I split up with him. And there was a reason why I’m at this point in my life where I feel like I have so much musical freedom, and I don’t have to explain myself to anybody… It was more of a thing where I was in awe. I was at that point in my relationship where I felt he could do no wrong. I thought he had my back and that he’d never steer me wrong. But then “I Will Never Let You Down” came out, and everything started to go a bit weird. I don’t know if it was because business was mixed with personal or what.” ← Previous Story Don Bleek’s Style Diary: What I Wore To The Beach In Atlantic City
Next Story → Fall/Winter 2015 Campaign: Dsquared2