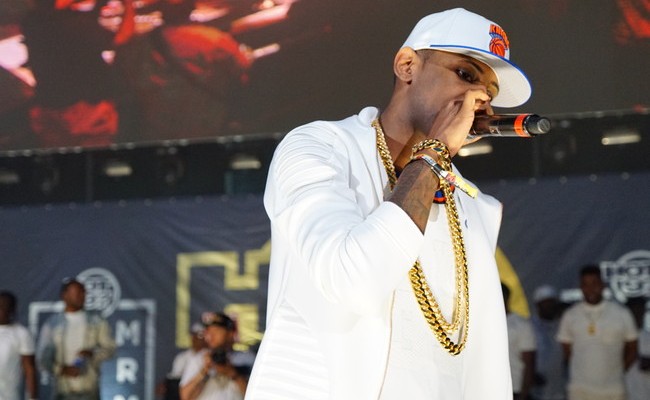 As usual, donbleek.com was reporting live from the press/media area (most of our updates appeared on Instagram @donbleekcom). The event was streamed on TIDAL.

The main event featured electrifying performances by Kendrick Lamar, Chris Brown, Trey Songz, Big Sean, Fabolous & Friends, Meek Mill, Ty Dolla $ign & Friends and Omarion and a lot of other surprise guests. Childish Gambino was scheduled to perform, but he was a no-show.

Omarion kicked off the show a little after 6 p.m. Aside from his signature dance moves, the MMG singer performed “Post To Be” and “MIA“. Los Angeles‘ Ty Dolla $ign took the stage for the second consecutive year. He brought out Dej Loaf for a performance of “Try Me” and his bandmate Wiz Khalifa for “We Dem Boyz” and “Or Nah“.

Ladies’ man and Atlantic Records recording artist Trey Songz had most of the females in attendance standing on their seats and screaming to the top of their lungs as he performed some of his chat-topping hits including “Slow Motion,” “Nana,” Touchin Lovin,” “Foreign” and “About You” before making room for his ‘Between The Sheets’ tourmate and good friend Chris Brown.

Chris Breezy‘s segment was filled with surprises. The Gammy Award winning artist returned to the stadium stage for the first time since 2013.  Of course, his dance moves were on point, Breezy didn’t miss a beat. The R&B/Pop star took us down memory lane by performing “Poppin” before diving into “Loyal“. Royalty‘s father also brought out 50 Cent and G-Unit to perform “Many Men” and “What Up Gangsta” and French Montana for “Hot Boy (Remix).

The biggest surprise of the night and my favorite moment was when Brooklyn‘s own Fabolous brought out just about every major New York artist from the 90’s and early 2000’s during his segment. This was my favorite part of the show because this was the Hip-Hop era that I grew up in. Back when emcees were really lyrically. The Def Jam rapper opened his set with “She Wildin” and “Ball Drop” with guests Chris Brown and French Montana, followed by bringing artists out from the ‘Golden Era of Hip-Hop‘ — Black Rob “Whoa,“ Busta Rhymes “Put Your Hands Where My Eyes Could See” and M.O.P.‘s “Ante Up (remix)” as Remy Ma appeared on stage to deliver her verse, followed by a performance of “Lean Back” featuring Fat Joe. This was Remy Ma and Fat Joe‘s first time performing “Lean Back” together since Remy Ma was released from prison last summer after doing a little over six-years. That was just the beginning of Fab‘s star-studded segment. He also brought out Method Man and Red Man, who performed “Da Rockwilder,” followed by Raekwon who performed “C.R.E.A.M.”  Fab then took it to Queens, NY by bringing out Mobb Deep for “Shook Ones Pt. II“. After being joined by Lil Kim in 2013, the Queen Bee supported Fab again this year. She came out during Mobb Deep’s performance of “Quiet Storm (remix), performing her hardcore verse. Kim later performed her classics including “Get Money” and “Money, Power and Respect,” bringing out The Lox, who also performed “We Gon Make It“. Ma$e helped Fab end his set by performing “Feels So Good” and “Been Around The World“.

Once again, NJ/NY showed West coast rapper Kendrick Lamar a lot of love last night at Met Life. He received a standing ovation just like he did in 2013. K. Dot ran through cuts off his debut, good kid, m.A.A.D city and his #1 album, To Pimp A Butterfly. He also brought out his Black Hippy crew members ScHoolboy Q, SZA and Ab-Soul.

G.O.O.D. Music‘s Big Sean held it down on his own by running through a few tracks off his latest offering, Dark Sky Paradise before later joining Meek Mill for “Burn“.

Meek Mill headlined this year’s bill. The Dreamchaser performed “Monster,” “Imma Boss,” and “Levels” before bringing out his surprise guests, Future (“Commas“), Big Sean (“Burn“) and his girlfriend, Nicki Minaj. She performed “Only” and “Truffle Butter“.

Special thanks to Hot 97 and Emmis Media!  See more videos and images on the next few pages.

← Previous Story Meek Mill Releases “Check,” Is It A Breakout Hit To Get A Release Date For ‘DWMTM’ & Reach A Mainstream Level?
Next Story → Miley Cyrus Covers The Summer 2015 Issue Of Paper Magazine