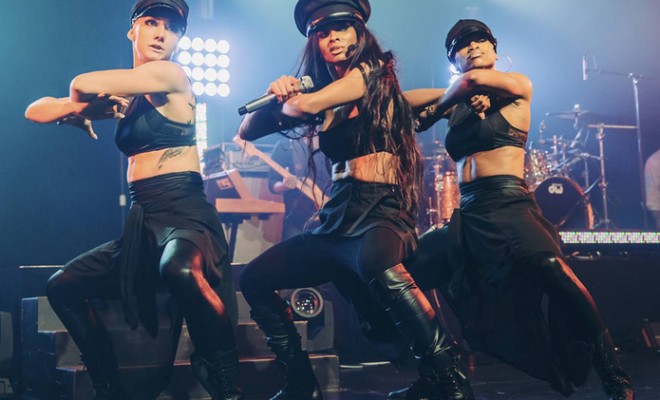 Grammy Award winning platinum singer Ciara has branded herself outside of music and ascend to the top of the fashion industry. She was once signed to Wilhelmina models and is often seen sitting front row at Fashion Week around the world. When she is now walking red carpets in her luxury dresses and gown, Cici is featured on the cover and inside of some of the biggest fashion publications.

On “Stuck On You,” a track from Ciara‘s latest album, Jackie, she sings about her luxury life by name-dropping a few upscale labels, “Margiela, Pucci, Givenchy/All of that fly look good on me/Vaccarello, Jordan, Cavalli/Wanna know what’s next? Just wait on me.”

In 2009, Givenchy‘s creative director Riccardo Tisci made Ciara a house muse. She’s definitely something of a high-fashion fixture these days, having most recently appeared in L’Officiel Singapore, W magazine, L’Uomo Vogue and L’Uomo Vogue.

“I had always admired fashion, but more so from afar,” Ciara explains. “I’ve evolved so much over the years when it comes to my style. I really know it now. Having become friends with these designers, I’ve gained a newfound respect for their craft altogether. Now I’m able to say I want some Calvin [Klein] simplicity but with a Stella [McCartney] vibe. I never used to have that mental fashion Rolodex.”

In a recent interview with Style.com, Ciara talked being friends with Riccardi Tisci, being inspired by Carine Roitfeld‘s style, Jackie‘s tour wardrobe and more. Below are some excerpts:

How did you become so close with Riccardo Tisci?

We met in Brazil seven and a half years ago. He was a fan of my music first. I can proudly say that when the designer-artist collaboration first began, it was both very fresh for him and me. I’m so blessed that he’s been so supportive of me through high and low. I really respect his opinion. He’s just a really amazing person. It’s been really cool to watch our relationship grow throughout the years. I was looking through pictures recently—for Throwback Thursday—and I thought to myself: Dang! I must have had over a hundred or so Givenchy looks over the years!

Would you still consider yourself a Givenchy muse today?

You’d have to ask him that. I just know our bond is still strong. What’s so beautiful about our creative relationship is that I get to see a lot of [myself] in the designs. It’s always been a really organic thing. One of my favorite dresses of all time, which I wore to the 2013 MTV Video Music Awards, was from his couture collection that unfortunately he no longer does. It was [a look] we went back in the catalog [to find]. He does a lot of what I gravitate toward.