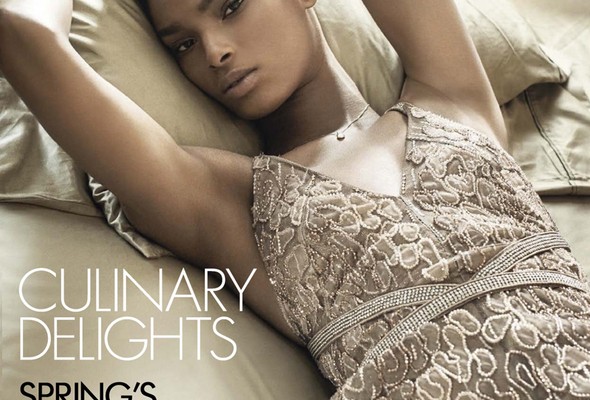 Kayla Scott: From The Bronx To High Fashion Kayla Scott made it! She has risen from the rough streets of the Bronx, New York to appearing in high end fashion campaigns and on runways around the world. Scott is one of only a handful of black models to get a solo Vogue Italia cover.

Scott recently chatted with Style.com about appearing in an ad for Balmain, covering Vogue Italia and much more. Below are some excerpts:

On appearing in Balmain’s campaign:

“It happened so fast after signing my contract, that I was so new I had no idea that it was going to be as big as it was. I only had, like, five pictures in my book, and I was still in the midst of trying to understand heels.”

On being surprised that she was chosen to appear in the Balmain ad:

“I was in shock that I was picked for that, but it was a blessing ’cause that’s when people started to first see my face and question who I was. I’ll always have a soft spot for Olivier [Rousteing] and the Balmain brand. They really gave me a great opportunity to be a part of something that was bigger than anything I could’ve imagined.”

On model aficionado Steven Meisel tapping her for the latest cover of Vogue Italia:

“Shooting Vogue Italia with Meisel was a blessing. It was one of the biggest shoots that I’ve encountered so far. I think Meisel is one of those photographers who understands it’s more than just a picture, it’s a feeling and a mood you’re trying to capture, and I think he does it very well.”

On still figuring out how to merge her low-key style with the luxe fashions she wears for work.

“I can’t really say that I was interested in fashion when I was growing up. I had all the sneakers and stuff that were coming out, but that’s only ’cause my brother wanted me to look like a mini him.”

On telling her family that she was going to model and her family in the Bronx still finds it hard to believe that she is featured in glossy publications:

“When I first told them I was going to model, it was great—everyone was happy and excited. And then once time started going by and pictures started coming out, I think everyone was in shock. I mean, why wouldn’t they be? I was wearing dresses and heels and skirts and makeup; that’s not how any of them were used to seeing me. The last time I wore a dress was in eighth grade for social.”

On her valuing the way her family and friends still keeps her grounded:

“My friends and family are really supportive. I love how they still treat me like I’m the most basic person in the world.”