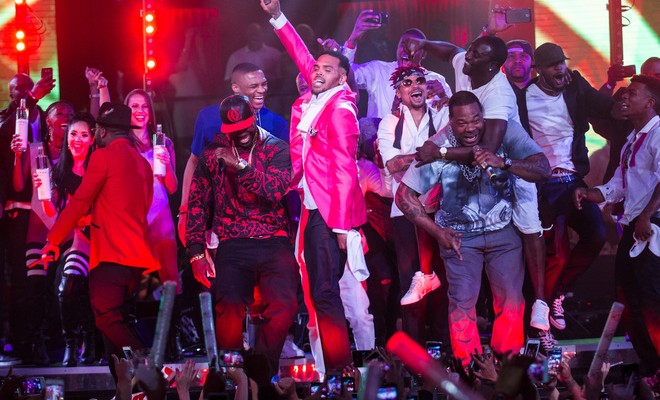 R&B/Pop singer Chris Brown was at the Floyd Mayweather Jr. vs. Manny Pacquiao fight at the MGM Grand Garden Arena in Las Vegas. Mayweather remains undefeated! Money Mayweather was ruled the champion by the judges. This September will be his late fight. He is set to announce his retirement after his final fight in September.

These loafers are available at Far Fetch and Matches Fashion.

After the fight, Breezy headlined a full-length live concert to a sold out crowd at Drai’s Beachclub Nightclub atop The Cromwell. Rappers 50 Cent, Tyga, Busta Rhymes, Too Short, singer Akon and NBA player Russell Westbrook joined Breezy on stage.

According to a press release, “Drai’s LIVE is a new entertainment experience in Las Vegas fusing together the worlds of nightlife and live concerts in an unprecedented way.  Bringing arena-level performers like Brown to a more up-close and vibrant atmosphere, Drai’s LIVE provides guests with an experience they cannot receive at any other venue in town.”

“Brown will celebrate his birthday at Yacht Club – the Tuesday night pool party at Drai’s – on Tuesday, May 5.  Following that, his next Drai’s appearance is another full-length live concert for Drai’s LIVE on July 4.”