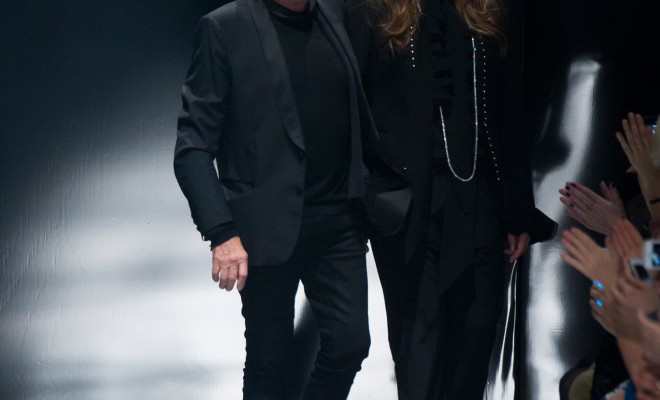 The above image is Roberto & Eva Cavalli at the house’s Fall 2015 Ready-to-Wear show.

Last summer, donbleek.com reported that Italian fashion designer Roberto Cavalli was selling a stake in his luxury fashion house. We also reported that London-based Permira Advisers LLP has approached Roberto Cavalii SpA about a likely acquisition of the company, see it here.

Apparently that deal fell apart because private equity firm Clessidra SGR SpA has acquired 90 percent of the label. Roberto will retain the remaining 10% of his company.

In a statement, Cavalii said, “I am extremely satisfied to have signed this agreement with an Italian partner which, I am sure, will further develop what I have built in a lifetime. Clessidra will provide financial, managerial and human resources that will allow the company to grow further and face the challenges of the ever-evolving luxury market.”

Six years ago, Cavalli and Clessidra SGR were in talks about an acquisition, but deal didn’t go through.

A few weeks ago, we also reported that Peter Dundas left his post at Pucci and returned to Roberto Cavalli. Dundas‘ successor is Massimo Giorgetti. He started his new role as creative director at Pucci last month.

← Previous Story Miuccia Prada Releases Her Pre-Fall 2015 Ad Campaign
Next Story → Donatella Versace Will Style Jennifer Lopez For Met Ball; Plus She Speaks On Her Givenchy Campaign & Company’s Plan For An IPO