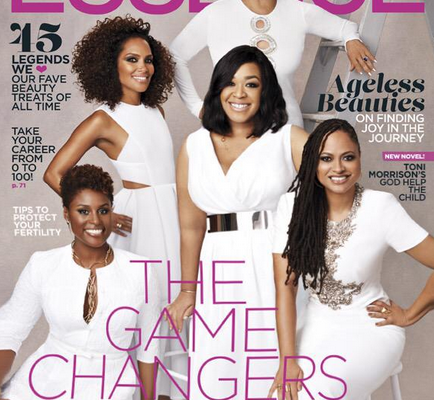 This is Black beauty, talents, class, education, and success at its best.

For the May 2015 issue of ESSENCE, the publication gathered Ava Duvernay, Shonda Rhimes, Debbie Allen, Issa Rae & Mara Brock Akil for their ‘The Game Changer‘ issue.

These women are the writers, directors, producers and creators of some of our favorite shows including Selma, Scandal, How To Get Away With Murder, Girlfriends, Being Mary Jane, Empire, Awkward Black Girl and more. Below are some excerpts via ESSENCE.

Five of the most powerful storytellers of our day grace the cover of the May issue of ESSENCE this month. Shonda Rhimes, Ava DuVernay, Debbie Allen, Mara Brock-Akil and Issa Rae, who’ve each made tremendous impacts on their respective mediums, look stunning in all-white dresses in the cover photo. Their confident and direct gazes, paired with million-watt smiles, speak volumes about the space they know they now occupy for us all.

Rhimes, producer/creator of the reigning must-watch evening of TV (Scandal, How to Get Away With Murder, Grey’s Anatomy), says that the fact that Black women are heating up the TV world, in front of and behind the camera, is not a trend to be dissected. “It’s an economic fact. There are more people of color than ever before…” she says. “When the shows start doing bigger numbers than what they think are going to be their top ten shows, it becomes really hard to suggest that it’s a trend.”

For Rae, creator of Awkward Black Girl and web show pioneer, social media prominence of people of color has helped drive this call for more representation in images and storylines but she wants to see many more people of color behind the scenes.

“Of course that has to happen,” says DuVernay, director of Selma. “But it is more about people working autonomously, independently, to create their own structures, mechanisms, companies, outlets. Look at you, Issa—nobody was giving you anything, so you created your own work and your own platform and your own way to distribute.”

Allen, who has had decades in the business as an actress and as a director, sees progress and hope. “I look at it as an opportunity. It is wide open and for the taking. When I first started, there were no women in the room, there were no Black people in the room.”

And with that growth comes the opportunity to show all shades of our lives, including our sex lives.

“I’ve been relentless [about discussing sexuality] since Girlfriends… My feeling about sexuality and showing a consenting adult having sex is that it’s so empowering,” Akil says. “Because if you are making the choice, you then have to be responsible for the choice. I think that message is conveyed to the audience. You’re not just there for the convenience of a man, you are there because you want it. It creates an opprotuntiy—well, hopefully—for the young lady watching or the other women watching to understand you have a say in this.”