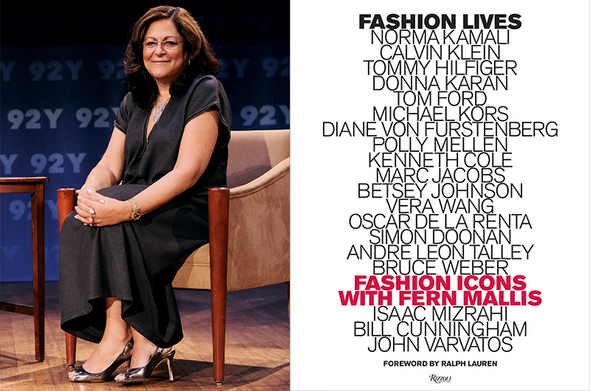 Fern Mallis Confirms Her Talk With Kanye West Will Happen If you are not familiar with Mallis, she is the creator of New York Fashion Week. Mallis told the New York Post, “I’m kind of over Kanye. I mean, I’m not a fan of his music, and the attitude and the agenda is not my style.”

West ended his letter to Mallis with an invitation to get a drink at the Spotted Pig.

Mallis is currently in promo mood, promoting her upcoming book, Fashion Lives. The book will release on April 14 via Rizzoli.

Style.com caught up with Mallis to talk about the industry today and if that Kanye West conversation is actually taking place.

According to Style.com, “the material inside is as in-depth, personal, and must-read as they come. Nearly every page is filled with an unbelievable personal account, from Tom Ford opening up about his relationship to Yves Saint Laurent to Marc Jacobs giving a rare glimpse into his early family life.”

What do you hope that someone takes away from reading this book?

I think it’s a book for anybody in business or anybody starting out in business. I want them to walk away seeing and feeling the humanity of these people, the width and breadth of their lives, the qualities that make somebody successful, the amount of work [put in], and how creative they are, and how hard it is to succeed and stay at the top of your game. When I talked to Marc, I remember looking out at the audience and saying at one point, “Have you all heard what he just said? This is the fourth time that they’ve gone bankrupt. The fourth time that they had to close the business and try to figure out, ‘What are we doing, and are we going to do this again?’” You know, I said to him, “Nobody’s a success overnight.” Everybody imparts wonderful stories about the influence of their families, too. I think I learned through this series how important everybody’s grandmothers were to them. Grandmothers seem to have been the driving creative force for many of these people.

Well, we’re waiting for that answer. They’re still working; they’re trying to clear the schedule. We are in touch with them every few days to see if it’s going to happen. We’re holding a date for him, and we’ll see if it happens. God knows, they’re probably going to have to do what they did when I had Tom Ford, which was take the second auditorium and live-stream [the conversation there], because I know that they’re going to sell out. And is that the good news or is that the crazy news that everybody’s going to want to be there to hear Kanye West? You know, [it’s] not because he’s a designer.

Are you guys looking forward to the conversation between West and Mallis?