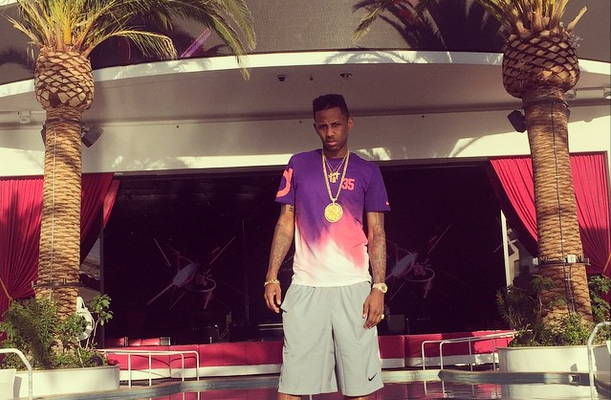 Kicks Of The Day: Rapper Fabolous In Kevin Durant’s ‘All-Star’ Nike KD 7; Plus He Performs In A Coogi Sweater Rapper Fabolous is in Las Vegas. He took a photo in front of his vacation spot–wearing a Kevin Durant All Star tee-shirt and grey Nike basketball shorts which was matched with a pair of Kevin Durant‘s ‘All-Star‘ Nike KD 7 sneakers.

The platinum-based kicks feature an iridescent gloss on the Hyperposite overlay, along with a pink-to-purple gradient effect on the cross-strap and medial Swoosh. The reflective forefoot Swoosh will illuminate during pre-game intros and an icy sole brings closure to the concept. The Def Jam recording artist performed at Drai‘s Beach Club Nightclub. For the performance, he stuck to his signature 90s look by wearing a colorful Coogi sweater. He rocked waxed denim jeans with his sweater.

In the 90s, a Coogi sweater was iconic, especially in the Hip-Hop and street cultures. The notoriously kaleidoscopic knitwear shot to fame after it became a personal favorite of the late great Biggie Smalls. On his track, “Big Poppa,” the Brooklynite said, “However living better now, Coogi sweater now.” Are Coogi‘s making a comeback? It seems like it is but I will pass on this trend. Related ItemsCoogidon bleekFabolousKicks Of The Day: Rapper Fabolous In Kevin Durant's 'All-Star' Nike KD 7; Plus He Performs In A Coogi Sweater