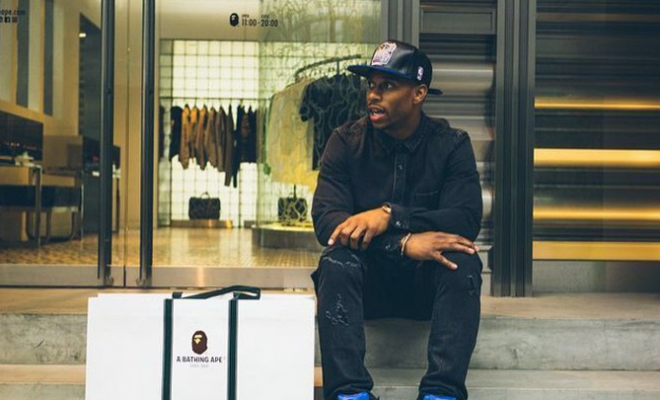 Cruz overlooking the city of Tokyo.

NFL player Victor Cruz has come a long way from the rough streets of Paterson, New Jersey (I was also born and raised in New Jersey). He went undrafted in the 2010 NFL Draft and was signed the day after the draft by the New York Giants.

During a single game in the 2011 season, Cruz had 10 catches for 142 yards—all in the first half—as the Giants edged the 49ers, 20-17, in overtime to advance to Super Bowl XLVI. The Giants then won the Super Bowl against the New England Patriots for another Super Bowl title. On July 8, 2013, Cruz signed a five year, $45.879 million total, contract extension with the Giants.

The talented football superstar who is also known for fashion is currently in Tokyo with his fiancée Elaina Watley and stylist Rachel Johnson.

Cruz has a great sense of fashion. He starred Kith for Ones Stroke Genesis Collection lookbook here and Gap Factory Ad Campaign here. He has also appeared in campaigns for Nike and Hugo Boss.

While in the capital of Japan, the professional football player shopped at boutiques including Bape, enjoyed some street art by viewing various murals, ate Sushi at Hour Sushi Spot, took a few meetings, had a conversation with former President of the United States, Bill Clinton at a secret location, and much more. Elaina, Cruz, Don C, Rachel and friends enjoying a night out on the town.