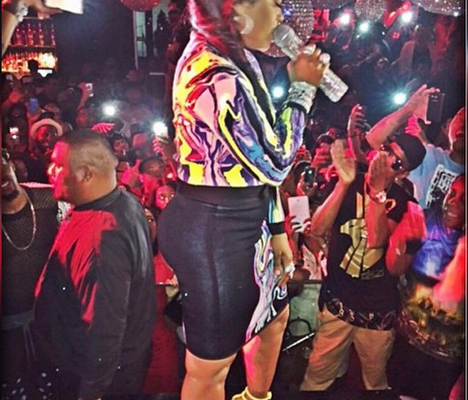 Multi-platinum female rapper Trina is performing at various venues across the country. At a recent stop in L.A., the “Forget Love” rapper took the stage in a cute black & printed ensemble styled with $950 Giuseppe Zanotti Neon Crisscross Sandals.

Along with the release of her sixth studio album in 2015, Trina is in the developmental stages of starring in her very own docudrama series with a popular production umbrella slated for release.

Jullian Boothe from The Executive Club Worldwide had this to say about the signing, “This is just the beginning of a successful new phase for Trina and her undeniable career growth. I’ve had the pleasure of working alongside her on all of her albums, and we are entering an exciting new chapter to take it to the next level.”

When asked about the new venture, Trina was quoted saying, “This is the beginning of a new direction and stage within my career, and now my own imprint—Rockstarr Music Group. I have collaborated with so many different talents during my career thus far, and I am beyond excited to share this phase with the world as I continue to evolve.”

Neil Levine, President and CEO of Penalty Entertainment expressed “I am honored to welcome Trina and The Executive Club Worldwide to the growing Penalty family. The Trina brand is one of the most prevalent brands within the Hip Hop industry, and Penalty is pleased to continue the trajectory of such an A-list artist.”