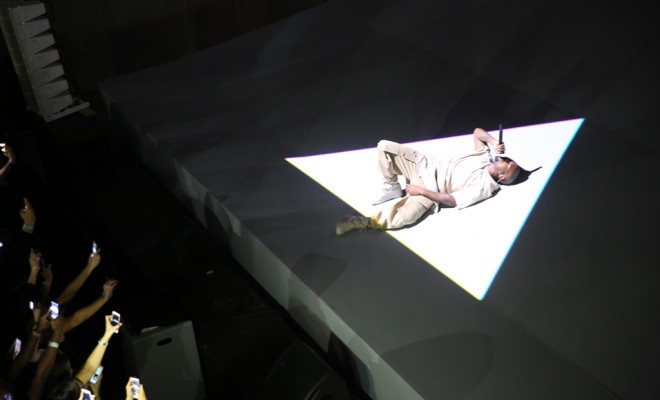 West also performed at an impromptu concert inside of the auditorium at Foundation Louis Vuitton.

Foundation Louis Vuitton “is the new Frank Gehry art destination that later this month will put on display Edvard Munch’s “The Scream,” Matisse’s “Dance” and other modern masterpieces,” according to Women’s Wear Daily.

Yeezy said to the crowd, “I wanna thank my original family for having me this evening, the LVMH group,” as he performed a version of “Runaway.”

At the concert, West also premiered his new music video,  “All Day,” directed by Steve McQueen.

According to Women’s Wear Daily:

In an interview after his performance, West was unequivocal about how fashion shows, particularly in Paris, nourish his creativity.

“As a musician, I would have never been able to design a show like what you saw tonight if it hadn’t been for my experience in Paris — learning how to minimize and make design decisions, how we started with just the single light,” said West. “It’s part of the show,” he pleaded.

Below are photos from Yeezy’s concert at Foundation Louis Vuitton.