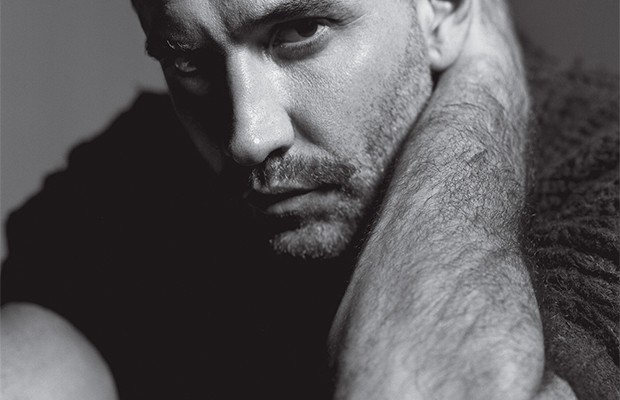 Givenchy’s Riccardo Tisci Talks About Dressing Kim Kardashian; Admits He Got “KILLED” Because Of It In an interview in the March 2015 issue of Details magazine, Givenchy‘s artistic director, Riccardo Tisci talks about designing menswear, what it was like for him growing up in Italy, his upcoming 10th year anniversary with Givenchy, famous friends being like his family, being “killed” for dressing Kim Kardashian, designing clothes for Kanye West and Jay-Z during their ‘Watch The Throne‘ tour, Kanye‘s kilt, and much more. Below are some highlights:

On why the idea of him designing a menswear initially left him cold:

“I mean, look at me, I wear jeans and trainers. I never bought fashion for myself. The only things I was obsessed with when I was young were Helmut Lang and Versace. At Givenchy, they asked me to do the men’s for so long, but I didn’t want to do it.”

What were you like as a teenager growing up in Como, Italy?

“I was obsessed with the Cure. Obsessed. I was, like, 15 or 16, going to art school, and I was literally full-on black makeup. Long black hair. It was funny because in Como, everyone is very bourgeois, everyone’s so chic. And I really was so obsessed with the darkness.”

You’re celebrating your 10-year anniversary with Givenchy in March. What do you remember about the early days?

“I was intimidated, because I had never done a big show. It was a big house, I couldn’t realize why I was there. When I arrived, I was young, in trainers and jeans and a sweatshirt, doing dark, using, like, all the coolest, strange girls. People were very tough on me, really tough. Someone called me the anti-Christ. When you’re young and you do a collection, you’re a little insecure. You always have, like, a bit of insecurity, but I think that’s really good—it makes you push more.”

You often post #family along with your Instagram photos of famous friends. How do you forge authentic friendships with them?

“They feel that I’m not there to dress a celebrity. I dress people even when they don’t have an Oscar nomination or they don’t have an album out. If they’re my friends, I respect them to the end. And you need to feel people stay with you because they love you, not only as an artist, but also as a human being. Look at Kanye and Kim—at the beginning, I was the only one.”

“By nobody. And she’s a sweet girl. And Kanye and me, we did it together. Every designer is dying to dress her now. I didn’t care what people thought about Kim. In the beginning, I met her because of my respect for Kanye, and then I liked her a lot and we became friends. I got killed because of this. But I didn’t care. That is a friend, you see. And this is why, when they got married, they asked me to dress them. They say, “You’ve always been with us. You’ve been a real friend.” If I like somebody, I like somebody. If I don’t like somebody, I don’t like somebody.”

As the creative director for Jay-Z and Kanye’s 2011 “Watch the Throne” tour, did you have any hesitations about designing clothes for two of rap’s biggest icons?

“When they asked me, of course I was honored, but I was scared. I was like, “Oh fuck, what am I going to do?” I said, “Are you ready to really break down this barrier?” Because for me, rap until then was about gloss and diamonds and the chain and fur, girls in swimsuits. And they were like, “Yes, we’re ready.””

Did Kanye have reservations about the leather kilt?

“For a second, he was a little bit doubting. Then he really trusted me. That’s when you understand when a friend is a friend. He knew it was not that I just wanted to sell my clothes. I didn’t care. I thought it was very punk for him to break down all these boundaries. I haven’t invented it. But it’s more serious, the way I do it. It’s darker, and it’s made with beautiful tailoring, fabric. And we sell a lot. Doesn’t matter if I put them in a show or not.”

Read the full interview over at Details.