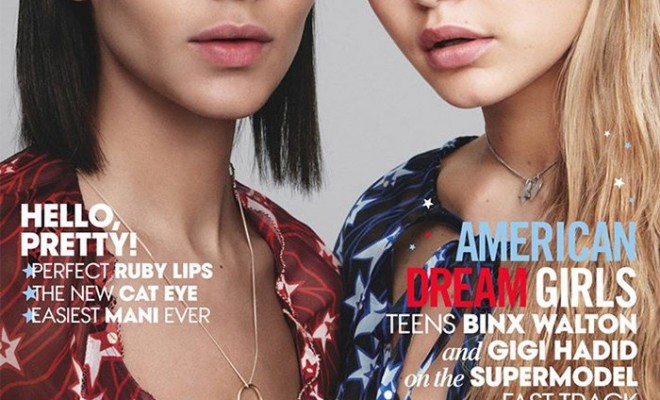 The modeling beauties were photo’d by Daniel Jackson and styling was courtesy of Sara Moonves (Camilla Lowther Management). Below are some excerpts:

“I’m going to Paris for four hours and I didn’t even know until two minutes ago,” a slightly damp 19-year-old Gigi Hadid announces as she drops her umbrella and slides next to me in a giant booth at a dimly lit eatery. “This is my life now. I’m so busy I don’t have time to stop and think about everything that is happening.” She’s clutching a charmingly ramshackle little yellow notebook like a prized possession.”What goes in there?” I ask. “Anything I want! My schedule, I love schedules—notes, little sketches,” she says, opening to a doodle-filled page. “I was just watching Alice in Wonderland on a plane to Australia, and I wrote down the quotes I liked.”

Gigi and 18-year-old fellow cover girl Binx Walton have been on a fantastical journey this past year. With the help of a cast of unique characters (think Karl Lagerfeld as the Mad Hatter and Tom Ford as the Cheshire Cat), they have become two of the most recognizable and sought-after fresh faces in the industry. Except unlike Alice, this is no daydream!

I meet the ladies on two separate but equally rainy afternoons in New York City, with Gigi at the shiny new Park Avenue South boîte Upland and Binx at the teeny, charming A.B. Biagi gelateria in Nolita. They may represent polar-opposite ends of the modeling spectrum—Binx is cast as the edgy, androgynous girl; Gigi is the charismatic blonde bombshell—but they have more in common than you’d think. Both girls are two minutes early, show up wearing primarily black outfits, and have a cool nonchalance.