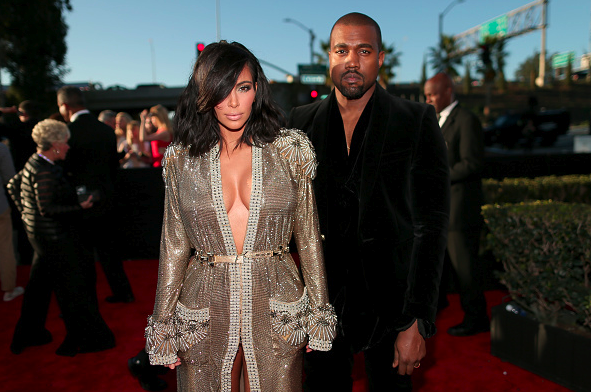 Best Dressed Male At The Grammys: Kanye West In Balmain The biggest night in music has arrived, wrapped up, and people are still talking about it. This past Sunday (February 8), the 57th annual Grammy Awards were held at the Staples Center in Downtown, Los Angeles.

This year’s event broadcasted live on CBS and was hosted by rapper turned actor LL Cool J for the fourth consecutive time. The brightest stars all made their way to the City of Angels, as Beyoncé, Pharrell Williams, Rihanna, Kanye West, Ariana Grande, Usher, Common, John Legend, Mary J Blige, Sam Smith and more all performed on the big stage.

A Grammy Award is an award or privilege granted as a special honor or as an acknowledgement of merit by the National Academy of Recording Arts and Sciences of the United States to recognize outstanding achievement in the music industry. For more than five decades, the Recording Academy continues its legacy and ongoing growth as the premier outlet for honoring achievements in the recording artists and supporting the music industry.

On a positive side, Kendrick Lamar took home two awards for ‘Best Rap Song’ and ‘Best Rap Performance’ for “I” and the ‘Best Rap Album’ trophy went to Eminem for ‘The Marshall Mathers LP2’.

Sam Smith received the most wins of the night, walking away with four Grammys including “Record of the Year,” “Song of the Year,” and “Best Pop Vocal Album”. Beyoncé and Pharrell Williams were right behind the “Stay With Me” singer (Sam Smith), leaving with three wins each.

In my opinion, Kanye West was the best dressed male. I love his great sense of fashion. For last night’s event, he went for an all-black Balmain outfit and his wife Kim Kardashian-West wore a gold and silver Jean Paul Gaultier gown picked out by Mr. West himself.

They looked so nice together!