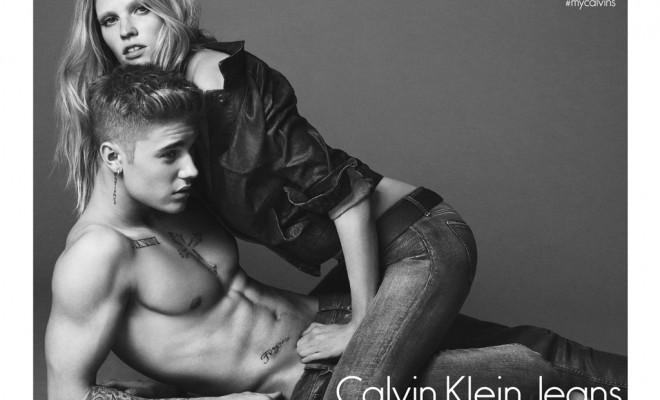 Model Lara Stone is also featured in the ad campaign.

For the Calvin Klein Jeans ads, Stone and Bieber poses in black-and-white images that are reminiscent of the Mark Wahlberg/Kate Moss 1980’s ads. Mert Alas and Marcus Piggott lensed the ads in NYC and feature the twosome wearing jeans and undies from the iconic American brand.

“The spring campaign will be featured in 20 countries and include digital and outdoor ads in addition to print. They feature the hashtag #mycalvins, an initiative created last year to encourage fans to post selfies of themselves in their Calvin Kleins.”

“The brand is also promising “experiential components timed to coincide with the March 2015 magazine issues.” The final details have yet to be worked out, but this is expected to include musical events.” Bieber said that working with Stone was “incredible. She is such a great girl. Our chemistry came very naturally, and we were both very comfortable. Mert and Marcus shot the campaign and are the best photographers I’ve ever worked with. It was really a magical shoot.”

Stone agreed, saying, “It was really fun working with Justin. I think the shoot really captured the energy of the Calvin Klein brand.”