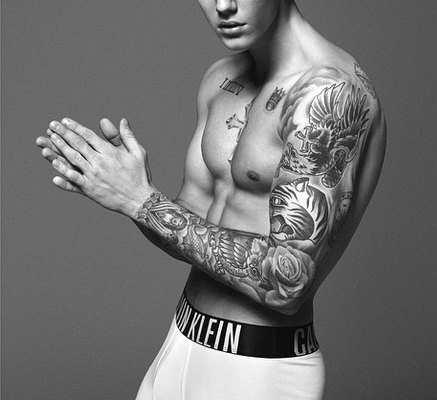 Just as promised, official images from the ad campaign for the iconic American label has been released. In the pic below, Bieber flaunts in abs, showing in Calvin Klein undies.

“I have been wearing Calvin Klein underwear for years in hopes of getting to model for the brand one day,” Bieber told WWD. “It’s always been a dream. Last spring, I posted a picture on Instagram in my underwear, using the #mycalvins tag. Thankfully the brand saw it and liked the reaction it was getting, and a relationship started from there.” “Fashion is very important to me,” he said. “It is a very influential form of self-expression, the same way music is for me. I strive to remain ahead of the curve with my fashion choices and am very grateful that the fashion world has embraced me in the way it has.”

“The spring campaign will be featured in 20 countries and include digital and outdoor ads in addition to print. They feature the hashtag #mycalvins, an initiative created last year to encourage fans to post selfies of themselves in their Calvin Kleins.”

“The brand is also promising “experiential components timed to coincide with the March 2015 magazine issues.” The final details have yet to be worked out, but this is expected to include musical events.”