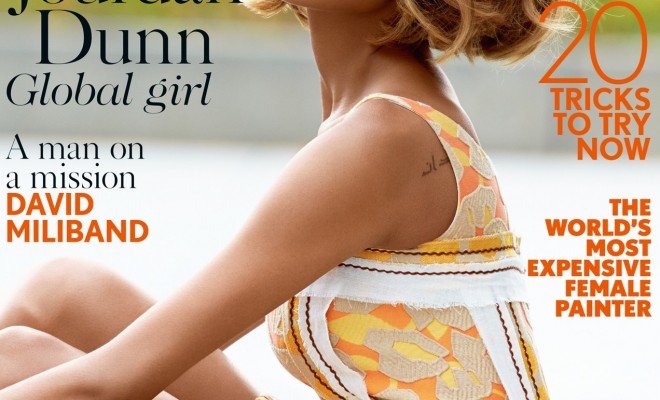 Finally, they put a Black girl on the cover of British Vogue! British fashion model Jourdan Dunn covers the publication’s February 2015 issue which was lensed by Patrick Demarchelier. Dunn styles in a cute bright dress from Prada‘s SS’15 collection on the cover.

This is major because Dunn is the first Black model to get a solo British Vogue cover in 12 years.

I am so happy for Dunn and this really means a lot for Black models. They already have to work twice as hard as White models and are still only able to accomplish half of what their White counterparts accomplished. We still have to keep fighting for diversity in the fashion industry, continues to break barriers and leave our footsteps behind so that next Black model could follow in our footsteps.

Hopefully in 2015, the fashion world does better and go by talents verses politics and race.

According to British Vogue:

“The cover marks her second appearance, following her debut as one of the faces of “British Beauty Now” alongside Rosie Huntington-Whiteley and Eden Clark in November 2008, and she also fronted Miss Vogue’s second issue in April 2014.”

“Dunn was famously scouted by Storm models when she was just 14 and made her catwalk debut for Marc Jacobs within a year of being signed. As well as fronting campaigns for brands including YSL Beauty, Burberry, Calvin Klein, Balmain, Maybelline, H&M, Topshop, DKNY and Tommy Hilfiger, Dunn is a vocal advocate for the Sickle Cell Society – coordinating fundraising and hosting charity events – inspired by her son Riley, five, who has the condition.”