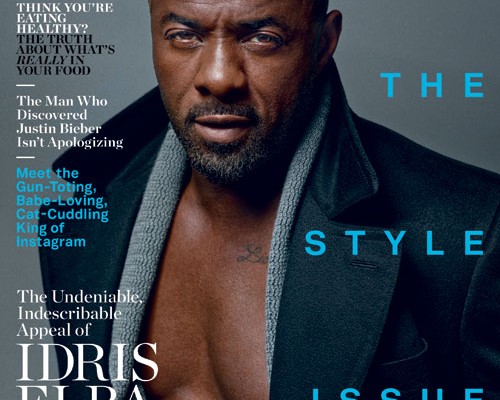 British actor Idris Elba covers ‘The Style Issue‘ of Details magazine. The No Good Deed star styles in a Dunhill coat, Gucci sweatpants and Berluti sweater in his pictorial which was photographed by Mark Seliger.

The Hackney-born actor is such a hot topic with a great resume-he appeared in The Wire, Mandela, and Pacific Rim.

Inside, the 41-year-old Brit talks about moving back to London from Los Angeles, assembling his own development team at Green Door partly, his character in No Good Deed,

On staying in London (he moved back there from Los Angles after his father died) and where his ambition started:

“This is where my ambition started, you know?” Elba says. “I fell in love with a movie—some live-action Spider-Man at the Rio in Shoreditch. Saturday-matinee situation, kids climbin’ all over. But I was just fascinated. I knew from age 10 that this was the industry I wanted to be in.”

How it is living back in London:

“It’s fascinating now, being back here,” Elba says. “It’s a real check-up, you know? I haven’t lived here for 15 years, but there’s a familiar feeling I have from before I went to America.

NEXT PAGE: MORE PICS AND EXCERPTS: On assembling his own development team at Green Door partly as a reaction to the kind of roles he was being sent after Mandela-or, to be more precise, the kind he wasn’t:

“You know, I’d just played this iconic human being, and the scripts I got afterward were sort of . . . disappointing.

“It’s hard not to sound disgruntled sometimes as an actor,” Elba says.

“Look, I know that I work a lot, but I’d prefer to wait sometimes because I don’t want to just do rubbish films anymore or characters that anyone can play,” he says.

On his character in No Good Deed:

“There must be some demons within me, because I sort of enjoyed having that rage,” Elba says of his character. “The other actors were like, ‘Oh my God, you’re terrifying the shit out of me!'”