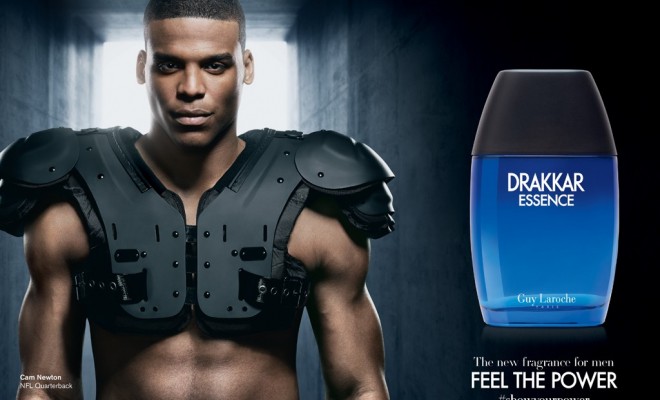 Professional NFL player Cam Newton is making some major moves off the field. The Carolina Partners running back is a man of style.

He designed his own men’s wear with Belk for the past two years and was featured in an ad campaign for Under Armour.

The 25-year-old just inked a deal to front a fragrance campaign for L’Oréal’s new Drakkar Essence scent. The price points for the eau de toilette range from $48 for a 1.7-oz. bottle to $68 for the 3.4-0z. size to $88 for the 6.8-0z. version. Expect the fragrance to launch throughout the Macy’s chain with visual slated to start August 20, then roll out to a full distribution of 1,500 U.S. doors. The launch will also be supported with some magazine advertising, but most of the promotional power will come through social media.

According to Women’s Wears Daily:

The Drakkar brand’s historic ad slogan has always been “Feel the Power.” L’Oréal added a hashtag #showyourpower in a sly reference to Newton’s habit of striking a Superman pose on the playing field after scoring touchdowns. The hashtag will be used for Instagram, Facebook, Twitter and Vine, where consumers can download pictures of themselves or even videos so they can join in.

Alexandre Choueiri, president of International Designer Collections at L’Oréal USA, said, “Twenty-two years after Drakkar Noir launched, we thought we were ready to bring in a new chapter. The ambition here under this new Drakkar brand, Drakkar Essence, was to open another segment of the market.” He was referring to Millennial customers. “So we were looking for something younger, closer to their day-to-day passions. The idea of partnering with an NFL player came exactly because of those reasons.”