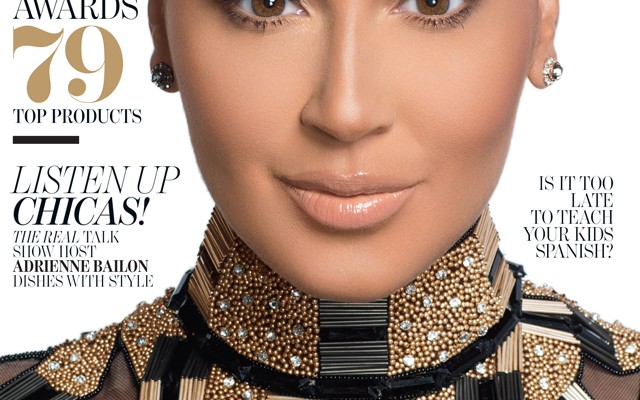 Adrienne Bailon is more than a Puetro Rican – Ecuadorian girl from the projects of New York‘s Lower East Side. She is also a singer, songwriter, actress and television personality.

The Real talk show co-host is covering the September 2014 issue of Latina magazine. In the cover story, the 30-year-old Latina beauty opens up about the aftermath of Keeping Up With the Kardashians label, why she won’t bring her boyfriend on a reality show (she’s been dating Def Jam Executive Lenny Santiago for five years), being cheated on by Rob Kardashian, being ready to settle down, suffering careers ups and downs, and more.

On the aftermath of Keeping Up With the Kardashians: “To be stuck with that Kardashian label, that was so hurtful to me and to my career.  I probably realized that too late—not that it would’ve affected my decisions in terms of who I dated, but it would’ve affected my decision to appear on the show. At the time,  I didn’t think anyone would even care. To this day, people will still say, ‘You ruined Rob’s life!’ and I’ll think, Damn, I was still playing with Barbie dolls when I met him.”

On why she won’t bring her boyfriend on a reality show: “When I was doing the reality show [Empire Girls] with Julissa [Bermudez], the producers wanted me to show my relationship with Lenny, but I didn’t want to do that; I didn’t want a repeat of what happened with Rob.”

NEXT PAGE: MORE HIGHLIGHTS FROM ADRIENNE BAILON’s INTERVIEW WITH LATINA

On suffering Rob Kardashian’s infidelity in the public eye: “It’s common knowledge that he cheated on me, and it always bothered me that people were like, ‘Pero, why couldn’t you forgive him?’ Why are women always the ones who have to forgive? If you cheated on a man, he would be like, ‘You’re disgusting, and I want nothing to do with you.’ But women, we’re supposed to be like, ‘He messed up. He made a mistake.’ And, in my situation, it wasn’t like, ‘Oh my God! I made a mistake!’ He strategically planned things out so that he could cheat on me, and that to me was so disloyal.”

On going public with her new love, Def Jam Records exec Lenny Santiago: “I wanted to let people know that we’re not a secret—we’re just private. Secret relationships are shady, and it’s never been that. Five years into our relationship, we’re no longer at the beginning—we’re established now. We’re in a great, strong place where any negativity cast our way won’t affect us. It was a big birthday for him—he turned 40—and I felt like, ‘I want people to know that I love you, and I think you’re freakin’ amazing.’”

On being ready to settle down: “If by some miracle we started taping The Real in New York tomorrow, I’d marry him, like, right now. I want a family. I see my sister and she’s on her second baby, and I’m like, That’s success. Having a family—I can’t wait for that.”

On surviving career ups and downs: “One thing that growing up in [New York] taught me was never to give up. Do you know how many times my career has been close to rock bottom? Each time, I was like, Girl, figure it out. Reinvent yourself. Just the other day, I was having lunch with my mom, and she said, ‘You’ve taught me so much. You are so resilient.’”

← Previous Story Her Beach Is Better Than Your: Angela Simmons In Barbados
Next Story → Just Cavalli Launches ‘For Him Just Gold’ Eau De Parfum