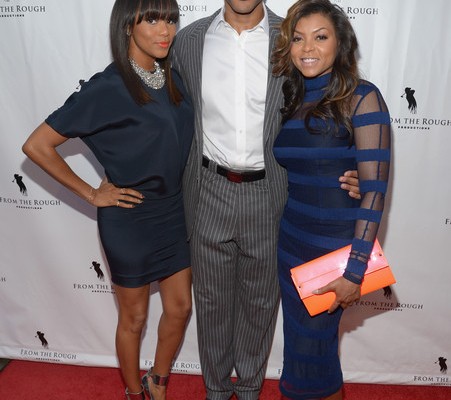 From the Rough is in theaters now! “Starring Academy Award nominees Taraji P. Henson and Michael Clarke Duncan and Tom Felton, is the inspirational true story of Catana Starks from historically black university Tennessee State, who became the first African-American woman ever to coach an all-men’s team at the collegiate level. Through grit and determination, she overcame incredible odds and deep-seated prejudice from all corners to guide a rag-tag group of golfers to an all-time record championship season“.

The Hollywood‘s premiere of the film was held at ArcLight Cinemas. Taraji P. Henson & her son Marcel, Henry Simmons and Letoya Luckett were in attendance (the three also stars in the film). NEXT PAGE: MORE PICS FROM, FROM THE ROUGH PREMIERE

← Previous Story Diggy Simmons’ ‘The Start Up’ Coming To BET; Looks Dapper At The Network’s Upfront Presentation
Next Story → Don Bleek Interviews Actor Henry Simmons; ‘From The Rough’ Is Now In Theaters