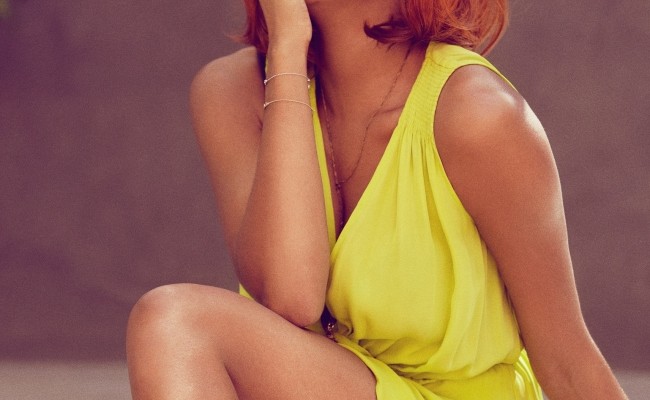 LeToya Luckett Covers Rolling Out Magazine; Opens Up About Her Insecurities & Truly Loving Herself R&B singer and Single Ladies actress LeToya Luckett covers the latest issue of Rolling Out magazine. On the cover, she looks fabulous in a neon dress. She’s also showing off her new auburn bob hairdo.

For this shoot, the “Torn” singer was shot by celebrity photographer DeWayne Rogers and styled by Seth Brundle. Luckett rocked various looks including bright colors and floral prints.

Inside, the Houston beauty opens up about how it took a while for her to feel comfortable in her own skin, the glare of the spotlight only amplifies insecurities, Taraji P. Henson‘s role as Starks in the film, From the Rough, getting her start as an actress, relationships and much more.

Her new film, From the Rough arrives on April 25th and she’s also in the studio working on her forthcoming LP, entitled Until Then (which is scheduled to drop later this year).

On it taking a while for her to feel comfortable in her own skin and truly loving herself:

“I had things about myself that I [didn’t] like,” say Luckett. “I [would always say] ‘I wish I had this, I wish I had that.’ I used to have this thing about my legs. If you look at all of the Destiny’s Child albums from when I was a part of the group, you never saw me in a skirt. I was always the one who wore the pants, because I felt like my legs were too skinny.”

“You want your boobs to grow; you want all kind of things to happen,” she says, with a laugh. “Eventually things fill out — and sometimes they fill out too much!”

On how the glare of the spotlight only amplifies insecurities:

“People like to pick at your imperfections and that can be very hard on you as a person. I think a lot of times people forget that we’re human beings and some of us are fighting self-esteem issues already,” she continues. “I love Instagram and Twitter and I think it’s awesome that fans can connect with their favorite artists, but it also gives them a chance in that comment box to say what they really feel about them. Be confident in who you are and who God made you to be. I can’t pay attention to it. I’d go crazy out here.”

NEXT PAGE: MORE PICS OF LETOYA LUCKETT FOR ROLLING OUT