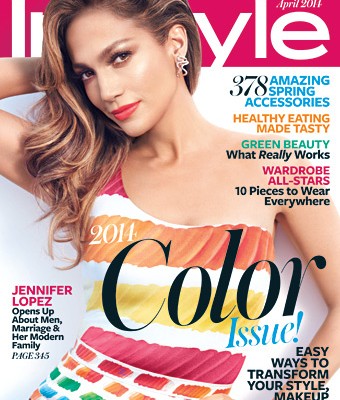 On the April 2014 issue of In Style, pop singer Jennifer Lopez styles in a color-blocked Chanel ensemble. The Grammy Award winning artist is currently working on her 1oth studio album which arrives later this year via 2101 Records/Capitol Records. For the project, J. Lo has already collaborated with Chris Brown, Future, Robin Thicke, French Montana, Big Sean and Redone.

The 44-year-old Latina actress will star in and produce her own television series for NBC. Lopez’s police drama series, Shades Of Blue was just picked up by NBC for the 2015-2016 season. See the original post here! Below are some highlights from J. Lo’s In Style story.

She is a woman who has it all (a successful career, adorable twins, and a younger man), and a woman who does it all (Idol host, clothing line designer, and movie star, among many, many, many other things).

With a life like that, one would think Jennifer Lopez’s day needs to be hyper-scheduled—and to a certain extent, it is. But even the best laid plans can end up a bit messy, and Lopez is just fine with that.

J. Lo told writer Nancy Hass, “You get to a point in life where it suddenly occurs to you that you don’t need all the things you once thought you did—that it’s really, well, convoluted”. My life feels overblown sometimes, and I don’t want it to be. I want it to be streamlined. So I’m living a much more unscripted life now than I have in a long time.”