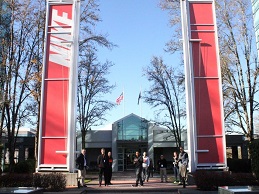 In a state filing Thursday, Nike said it will be reducing its world headquarters in Beaverton by at least 500 employees. The layoffs, which were first reported by the Portland Business Journal, will start to go into effect October 1.

Last week, Nike outlined a series of senior leadership changes and the planned job cuts without specifying how many employees would be affected. At that time, the company said it expects to incur between $200 million and $250 million in employee termination costs.

In June, the company rolled out its Consumer Direct Acceleration, a “digitally empowered phase of Nike’s strategy to unlock long-term growth and profitability.” The recent leadership changes were said to be in support of that.

“This permanent reduction in workforce will include members of Nike’s corporate leadership team and some corresponding executive assistants,” according to the layoff notice to Oregon officials signed by Nike’s vice president of Total Rewards Kim Lupo.

The scaling back will also include the permanent closure of Nike’s child-care centers, which will impact 192 staffers.

A Nike spokesman noted via e-mail Thursday night that the company is shifting its child-care strategy and is launching a new child-care benefit beyond its world headquarters and across the U.S. The child-care benefit will expand from hundreds to thousands of employees, including for the first time, staffers in retail, distribution centers and air manufacturing innovation.

In Thursday’s state filing, Lupo wrote, “Nike will provide the job titles and number of affected employees in each impacted job category upon request, once determined.”

Nike lost $790 million in its most recent quarter. The company, like other major retailers, was forced to close stores due to the pandemic shutdown. To try to build sales, the brand is playing up the digital side of its business and is gathering more consumer data to develop more specialized products. The juggernaut has also been realigned to focus on three categories — men’s, women’s and kids.

As of the end of May 2020, Nike had 75,400 employees globally, including retail and part-time employees, according to the company’s annual report. Earlier this week, a Nike spokesman declined to specify how many employees work in its home city.