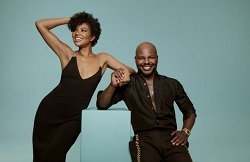 In 2017, D.M. Fashion Book reported that Union teamed up with Macadamia Beauty LLC and launched Flawless by Gabrielle Union at Ulta Beauty (see it here).

Slated for launch on Aug. 3, Flawless by Gabrielle Union marks its reintroduction to the market with a debut 12 products.

The duo anticipate the 3 Minute Restoring Conditioner to pique the most consumer interest. “It’s probably the star, if we have to choose,” Union said. “It gives the hair that silky feeling with none of the harmful ingredients.”

Union identifies the company as “majority Black-owned,” as she and Sims co-created the brand and retain control, in addition to garnering some outside funding. Industry sources estimate the line will bring in $5.6 million in retail sales during its first year.

Union credits personal experience as inspiration for the brand, noting that her own experiences with IVF left her dealing with premature balding. After collaborating with Sims — “I know she’s married to Dwyane [Wade], but I feel like I’m married to both her and her hair,” he said — on the best ways to stimulate hair growth and promote hair health, she incorporated ingredients she had success with, like biotin, creatine, rice oil complex and Brazilian bacuri butter.

“We had already done a lot of the legwork as far as choosing ingredients goes,” said Sims, who also highlighted the line’s absence of parabens, sulfates and silicones.

“A lot of women have had issues with premature balding, hormone-induced balding, hair loss, hair breakage, and I wanted to be able to address a lot of these issues but without price gouging,” Union added.

The relaunch was originally slated for March, but was postponed due to the coronavirus pandemic. Union noted that without access to salons, the timing wound up having a silver lining. “While we were in quarantine, many women were wanting to experiment with different hairstyles, whether that’s braids or waves, and really needed products that allowed them to experiment, at an affordable price point,” she said.

← Previous Story Teyana Taylor’s MAC Collection Is Giving Us That ’90s Vibe
Next Story → Alicia Keys Is Launching A Beauty Line With E.l.f.