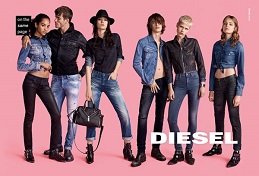 ITALY — Diesel SpA‘s new chief executive officer Massimo Piombini wants to close stores, raise prices and expand in sneakers to turn around a denim brand that had its peak in the 1990s.

Piombini, who took over Diesel in late January 2020, said the retailer’s 436 stores worldwide — some directly owned, some concessions — are “way too much, regardless of coronavirus.” Far from derailing its plans, the pandemic is accelerating some elements of his plan.

“I believe you can have a perfect representation of the brand with half of that perimeter around the world,” he said in an interview with Bloomberg. His plan is for Diesel to have flagship stores in a number of hub cities, from New York and London to Berlin and Tel Aviv.

Diesel is part of the OTB group, founded by the Italian fashion entrepreneur Renzo Rosso. Other brands in the group include Marni, Viktor & Rolf, Maison Margiela. In June 2019, OTB group, a stake in Los Angeles – based luxury label Amiri (see it here).

Diesel remains by far the biggest brand, generating about €900 million ($1 billion) of the group’s €1.5 billion revenue last year. In the 1990s, it became one of the best known Italian-designed global lifestyle brands and helped push denim into a premium category for the first time.

Piombini said Diesel “transformed the concept of denim worldwide” with its reputation for being at the forefront of cultural change and innovation. It was one of the first brands to feature gay men in its advertising, winning plaudits for its ad of two sailors kissing in the 90s.

In recent years it has become more of a mass-market brand and lost its upmarket position. It has also struggled to partake in the rapid growth of casual, athletic-wear, such as yoga pants.

In March 2019, D.M. Fashion Book reported that Diesel’s US division went through a Chapter 11 bankruptcy process after a turnaround by previous management failed (see it here). The appointment of Piombini is part of a rescue strategy put in place by the founder Rosso.

Piombini, who previously ran the brand Balmain, believes he can restore Diesel to its former glory. Alongside store closures, he wants to refine Diesel’s range and improve the design and quality of the materials to create a more expensive, premium product that attracts a younger audience.

He sees an opportunity for Diesel to increase its share of the lucrative sneaker market. It already sells 700,000 sneakers a year and Piombini hopes to potentially quadruple that number.

Diesel’s merchandising and marketing will be revamped too, and the company is accelerating its digital transformation. E-commerce accounts for only 12 percent of Diesel’s sales but its revenue is recording double-digit growth. Last week it launched “Hyperoom,” a virtual showroom that is similar to its physical one in Milan and will showcase its collections for third party vendors at a time when travel is difficult.