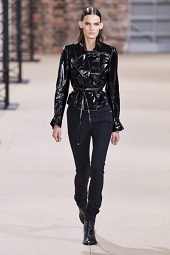 Contacted late Friday, Antonioli owner Claudio Antonioli said a deal has yet to be concluded, but could happen before the end of summer.

He declined to comment on design succession, but brushed off suggestions the famous founder, one of the original Antwerp Six, could return to the brand.

Last week, Anne Chapelle, chief executive officer of Ann Demeulemeester, issued a brief statement to reveal the departure of creative director Sébastien Meunier, who took up the reins after the founder’s departure in 2013. He had been Demeulemeester’s head men’s designer since 2010, according to his LinkedIn profile.

Chapelle thanked Meunier “for his dedication and everything he has accomplished since his arrival 10 years ago.”

Asked about future collections and shows — Demeulemeester is not listed on the official calendar for the upcoming online version of Paris Fashion Week for men’s — a spokeswoman for the house said “all will continue, but we focus on January.”

A Belgian entrepreneur who had been managing director of Demeulemeester’s business since 1994, Chapelle acquired an undisclosed stake in the company in 2005. She is believed to be the shareholder of reference.

Her fashion holdings also include a stake in the Haider Ackermann business, which she has also been seeking to offload, other sources told WWD.

A pensive woman with gothic leanings, Demeulemeester helped put Antwerp on the global fashion map with her soigné tailoring and dark glamour.

A graduate of Antwerp’s Royal Academy of Fine Arts, she set up her company in 1985 and produced her first collection for the fall 1987 season, adding shoes and accessories the following year.

Claudio Antonioli founded his first Milan retail outpost in 1987 and is a co-founder of streetwear conglomerate New Guards Group, recently acquired by Farfetch (see it here).