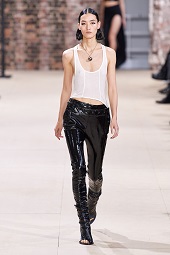 In an brief announcement signed by Demeulemeester chief executive officer Anne Chapelle, she thanked the designer “for his dedication and everything he has accomplished since his arrival 10 years ago.”

The designer has received largely positive reviews for honoring the romantic spirit and exacting tailoring of the acclaimed founder.

When Demeulemeester exited fashion in 2013, Meunier was among talents in the house trained by her. He had been Demeulemeester’s head men’s designer since 2010, according to his LinkedIn profile.

The French designer, who trained at the ESMOD fashion school, has worked for Jean Colonna, ran an eponymous brand, and worked for Martin Margiela for a decade before moving to Demeulemeester.

His next move could not immediately be learned.

A Belgian entrepreneur who had been managing director of Demeulemeester’s business since 1994, Chapelle acquired an undisclosed stake in the company in 2005.

One of the original Antwerp Six, Demeulemeester helped put Antwerp on the global fashion map with her soigné fashions and dark glamour.

A graduate of Antwerp’s Royal Academy of Fine Arts, Demeulemeester set up her company in 1985, and produced her first collection for the fall 1987 season, adding shoes and accessories the following year.