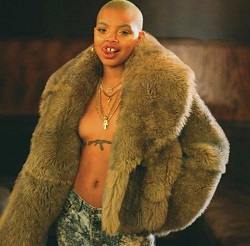 Model and actress Slick Woods, who was born Simone Thompson has parted ways with modeling agency The Lions and signed with Creative Artists Agency (CAA), which now represents the Los Angeles – native in all areas.

Just days ago, the Hollywood talent agency shared with WWD that it had signed Alessandra Ambrosio, who left IMG Models. CAA continues to grow its fashion division; it also represents models Adriana Lima, Winnie Harlow, and Candice Swanepoel, among others.

Woods is known for her bald head, gapped-tooth smile, tattoos and unique look. She is ranked on the Top 50 models list on models.com.

She is also recognized for being the face of Rihanna‘s Fenty Beauty and walking for Rihanna’s Savage x Fenty presentation while pregnant during New York Fashion Week in 2018 (and proceeding to go into labor after the show), the 23-year-old American model has also worked for Marc Jacobs, Jeremy Scott, Calvin Klein, Fendi and Yeezy. She has appeared in publications including Vogue, Elle, i-D, LOVE and Glamour.

Last year, she made her film debut as the star of Sam de Jong’s “Goldie,” which premiered at Tribeca Film Festival. The indie is expected to be released later this month. Woods, who is managed by Afrikaa Johnson at FTA Gallery, is also the cofounder and creative director of C1V1L Jewelry, a line that reinvests 20 percent of its profits into companies created by “unrepresented” founders.