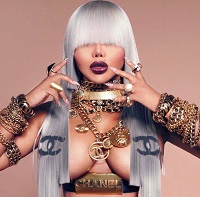 New York, United States — BET and Grammy award winning recording artist Lil Kim has announced a new release date for her delayed album 9; the project is now set to come out Friday, October 11th via Queen Bee Entertainment / eOne. It will be her first album in over 14 years.

Along with the news, the multi-platinum rapper also shared the single “Pray for Me,” featuring Rick Ross and Musiq Soulchild. The album will include the new song as well as her previously released tracks “Found You,” featuring O.T. Genasis and City Girls’ Yung Miami (listen to it here), and “Go Awff.”

“I’m so proud of this album and I thank my fans for their continued support,” Kim said in a statement. “Let’s keep this party going!”

“Pray for Me” is a tender slow-tempo song dealing with the dangers of losing a loved one to police brutality. After Kim’s emotional verse, the song revs up with Rick Ross and Musiq Soulchild’s features.