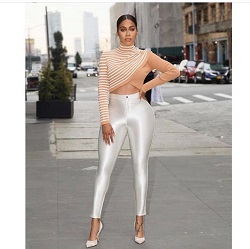 UNITED STATES — Power duo Lala Anthony and 50 Cent aka Curtis Jackson are joining forces once again for a new drama series at Starz.

The premium cable network has put in development Intercepted, a soapy drama from 50 Cent and his G-Unit Films and Television, with Anthony attached to star and executive produce.

Intercepted is based on Alexa Martin’s bestselling novel of the same name. It is the first of the three-book series The Playbook, inspired by the eight years Martin spent as an NFL wife.

Described as a funny and fresh contemporary romance, Intercepted centers on Marlee Harper (Anthony), who is the perfect girlfriend. She’s sure had enough practice, dating her NFL-star boyfriend for the last 10 years. But when her relationship unexpectedly ends, she vows to never date an athlete again. Only one problem: Gavin Pope, the new star quarterback in town, has Marlee in his sights.

Intercepted is part of the rich new overall deal Jackson and G-Unit inked with Starz last fall. G-Unit also is developing the series Black Mafia Family and Vanguard for the premium cable network, owned by Lionsgate.

In addition to her co-starring role on Power, Anthony is a bestselling author. Her recent TV credits include Star and The New Edition Story.