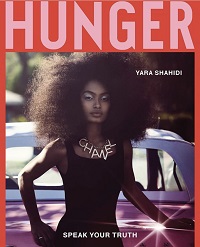 She is no stranger to being on the front page of a major fashion magazine. For the new issue of Hunger, Yara covers the magazine in an exclusive Chanel look, styled by Jason Bolden and photographed by Jamie Nelson.

It’s no surprise that Yara styled in Chanel. In 2018, the actress earned a coveted spot as a U.S. brand ambassador for the luxury fashion house. Since then, she’s starred in countless beauty videos, attended events on Chanel‘s behalf, and, of course, had front row seats at the shows in Paris wearing Chanel designs.