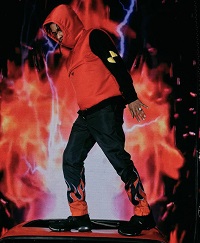 UNITED STATES — Platinum selling rapper A$AP Rocky, who recently released the official video to ‘Kids Turned Out Fine‘ (see it here) is currently performing on his “Injured Generation” North American tour, which comes in support of his latest album, Testing.

Throughout the tour, the Harlem-native was captured by photographers Cian Moore and A.Hilliard. His designer of choice is Prada. He styled in custom looks from the luxury Italian house. ← Previous Story Calvin Klein To Close It’s Milan Office
Next Story → It’s About Time! Prada To Prioritize Diversity, Both In-House And Across The Fashion Industry