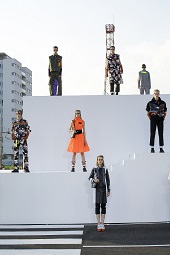 The brand is now hosting a runway show in the U.S., after spenting four seasons presenting runway shows in Europe during Milan Fashion Week Men’s.

Palm Angels made its catwalk debut in January 2017, the chic Italian streetwear brand is looking for a change of scenery and an opportunity to reach a larger audience. The label is therefore leaving Milan behind and will present its upcoming collection on February 8 during New York Fashion Week womenswear shows.

The brand first launched in 2015 by Francesco Ragazzi and the shareholders of New Guards Group, the Italian holding company founded in Milan by Claudio Antonioli, Davide de Giglio and Marcelo Burlon, which operates a portfolio of brands including Off-White and Heron Preston.

Ragazzi, who has served as creative director at Moncler for over a decade, splits his time between Milan and the U.S., in particular Los Angeles, where he searches out inspiration for his cool, carefree ready-to-wear label.

The adventure began with a photo project focusing on the California skate scene and the publication of the book Palm Angels in 2014. Over the space of four years, the concept has transformed into a standalone apparel brand which is currently distributed by more than 300 multibrand retailers, including Barneys New York, Maxfield, The Webster Miami, Selfridges, Saks Fifth Avenue and Harvey Nichols London.

No doubt Milan wasn’t bringing Palm Angels the level of visibility that it wanted, especially as the brand brings in most of its revenue from overseas: after Italy, its largest markets are the US, Hong Kong, China, the UK and Japan.

Palm Angels is one of the hottest streetwear labels on the market and has just opened its first store in Hong Kong, with plans to launch for three more retail locations in 2019.