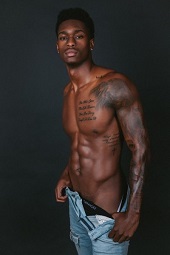 UNITED STATES — We’re almost wrapping up 2018 and Tynan Leachman, who hails from the Midwest had an incredible year.

The American model was featured in ad campaigns and magazines, walked runway shows and put his athletic body on display in various photoshoots.

In his newest photoshoot, the Chicago – native continues to display his natural beauty and physique in a pair of Richard Dayoff underwear and distressed denim jeans.